Report card ratings fall in 2nd round of new system 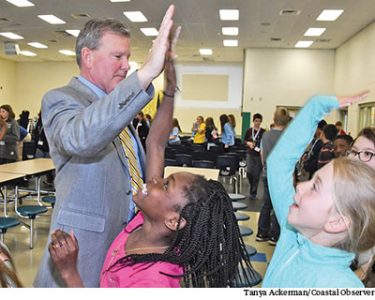 Waccamaw Intermediate was named the Palmetto’s Finest elementary school in the spring.

This is the second year the state has used the current formula to comply with the federal education law known as Every Student Succeeds that was adopted in 2015. Last year there was so much concern about the new formula, the release of the report cards was delayed for weeks.

School academic and progress ratings are based on student performance on standardized tests and indicate whether students are meeting state goals. They follow a 100-point scale, with elementary and middle schools having different weightings from high schools, which also consider college and career readiness.

Waccamaw Intermediate’s overall rating was 53, which is “good,” one point above an “average” rating. Last year the rating was 65.

The intermediate school was ranked “excellent” for academic achievement and student engagement, “good” for preparing for success, and “below average” for student progress.

Waccamaw Intermediate, which was named a Palmetto’s Finest school in the spring, ranks second among Georgetown County elementary schools in the state report cards. Sampit is No. 1 with a 55.

Coastal Montessori’s overall elementary school rating was 44, which is average, three points above a below average rating. Last year the rating was 55.

The charter school is the sixth rated elementary school in the district.

The middle school grade at Coastal Montessori was 45, which is average, three points below a good rating. Last year the rating was 52.

It was ranked good for academic achievement and student engagement, average for preparing for success, and below average for student progress.

Coastal Montessori had the second highest middle school score in the district. Rosemary Middle was No. 1 with a 46.

This year, like last year, Waccamaw High is the topped ranked school in the district, 11 points higher than Georgetown High and Sampit Elementary, both with 55.

Waccamaw High’s overall rating was 66, which is good, two points below an excellent rating. Last year the rating was 68.

WHS was ranked excellent for graduation rate, good for preparing for success and college and career readiness, and average for academic achievement and student engagement.

The district, at 86 percent, continues to outpace the state, at 81 percent, in graduation rate. However, the district rate declined from 86 percent in 2017-18.

The middle school was ranked excellent for preparing for success, good for academic achievement and student engagement, and unsatisfactory for student progress.

Waccamaw is the lowest rated middle school in the district, but the only one without sixth graders, who tend to do well on standardized tests.

Because Waccamaw Elementary School only has students through third grade, who do not take the standardized tests, it did not receive a report card.