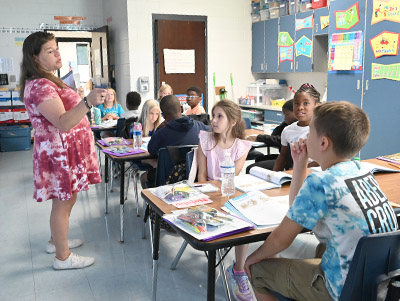 Third-graders at a summer reading camp at Waccamaw Elementary.

While state Superintendent of Education Molly Spearman is worried about how far behind the state’s third-graders are academically, those at Waccamaw Elementary School outperformed the district and the state on the report cards released this week.

“Considering the circumstances I was real pleased,” principal Ashley Cameron said. “Considering the different changes in instructional models, overall they did pretty well.”

Sixty-eight percent of Waccamaw third-graders met or exceeded expectations in math, 61 percent in science and 60 percent in English.

The Montessori middle schoolers missed the district average in math by 1 point.

Cameron and her staff are already diving into the report card data and meeting with teachers.

“You can’t just look at the numbers, you have to say: What am I going to do with the numbers now,” she said.

For the first time the school has an interventionist working one-on-one with struggling students.

“I’m confident it’s going to be very beneficial,” Cameron said. “We’re going to see a lot of gains by having that position. That’s going to be a huge plus for us moving forward. ”

School staff started identifying students who might need extra help at the end of the last school year.

The annual report cards were released Wednesday. Because of the COVID-19 pandemic, schools and districts were not given overall grades and the results came with a caution that they shouldn’t be used for year-to-year comparisons.

Spearman said Tuesday she was not shocked by the overall numbers on the report cards, considering the turmoil students have faced since the start of the pandemic in March 2020.

“We anticipated that our results would be different, that our students would not be able to show the growth that we had hoped,” Spearman said. “We knew that this assessment data would have to be looked at very, very carefully, keeping in mind the context of how this assessment was done.”

“We have been using many assessment results to identify specific areas of need for specific classes, grades, schools, and the district,” Price said. “There are no scores attached to this year’s report cards but we know we have work to do.”

Waccamaw High led the district in students scoring a C or higher on end-of-course assessment tests:

The percentages in all four categories were also higher than the state.

“What we were able to do with the limited time we had our students in the classrooms I think that we put our best foot forward,” principal Adam George said. “We’re still doing a lot of positive things.”

Chris Overbeek has transitioned from math teacher to math interventionist at the school. Overbeek is working individually, or in small groups, with students who are struggling.

Price said student performance in math overall in the district showed more of a decline than reading.

“This is consistent with our formative assessments that we reported on last fall and last winter,” he added.

George said he and his staff don’t wait for the release of the yearly reports cards to study data.

“We continually strive, every week, to work on how to improve,” he added.

Waccamaw High also had the top graduation rate in the county at 94 percent, ahead of both the district (87 percent) and the state (83 percent).

Spearman said the state’s top priority was getting seniors to graduate. One of its tools was increasing the opportunities for virtual learning for students who fell just short of the state’s graduation requirements.

“[It] is a bright point that we claim a little victory here,” she added.

The report cards for each district and school in the state are available at screportcards.com.