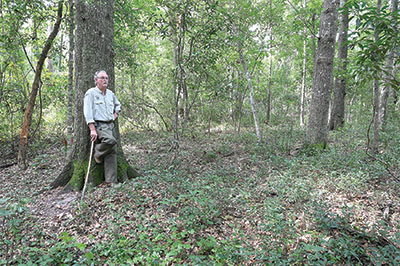 Bill Hills led the effort that called on the county to keep the property. He envisions a nature park on the site.

Hickory, poplar and pine trees rise overhead. Empty beer bottles, old tires and chunks of concrete are underfoot. But whichever way you look, the 13 acres in Murrells Inlet belong to the public.

Area residents want the property to stay that way, and last week convinced Georgetown County Council not to declare the tract as surplus. “No one in Murrells Inlet was consulted about this,” said Bill Hills, an inlet resident who organized opposition to the move.

The property sits astride Pond Road, which bisects one of the ponds that give the road   its name. Pond Road threads its way between the golf course communities of Prince Creek and Wachesaw East. Most of the other ponds in the area are man-made and collect stormwater from a series of residential subdivisions.

When Hills walks through the largest portion of the property, about 9 acres, he envisions unpaved walking and bike trails. He stops at the edge of a swamp filled with tupelo. “Can’t you imagine a boardwalk along the wetland?” he asks.

He collected over 200 signatures and emails opposing the surplus declaration.

Kathy Summers has lived next door to the tract for 24 years.

“This wetland is very highly functioning in several ways that directly benefit the community,” she said. “We have mating pairs of owls, hawks, pileated woodpeckers. We have deer, we have fox, we have raccoon, even turkeys that have inhabited this property for many, many decades.”

The county has owned the property, which totals 21.9 acres, since 1971. It was used to dispose of debris from Hurricane Hugo in 1989. Spoils from a dredging project in Murrells Inlet wound up on part of the property. A portion of the site was leased for a communications tower. A water tower is going up on another portion.

The county routinely reviews its list of land holdings and sells those “that we currently don’t have any plans for, that we don’t have a notion of a future plan,” said Wesley Bryant, the deputy county administrator.

Pond Road ended up on the list because the county wanted to do a land swap as part of a drainage project a little farther west in Murrells Inlet. It was a matter of convenience, Bryant said.

After listening to concerns about the Pond Road property, he said he would do some more investigating.

Bryant said he wasn’t aware that the property had been used as a dump until Hills brought it up. It isn’t on the state’s list of contaminated sites, he added.

Wesley and Gina Gordon, who created a residential development at the western end of Pond Road, said the stormwater project that allowed the road to be paved in 2010 ended up dumping water on their property. Bryant said he will look into that, too.

Stormwater is also important to the neighbors.

“It is not surplus. We depend heavily on this land to drain our properties,” Summers said. “Not only are we passionate about our wildlife, we do need to preserve some green spaces in Murrells Inlet.”

“People in Murrells Inlet have heard enough hollow statements about reducing density, and now you want to sell county land for a development,” he told the council last week. “My goodness, folks, we don’t need another housing development in Murrells Inlet. We need a park.”

The Pond Road property is only 400 yards from Wachesaw Park, which is just under 8 acres on Old Kings Highway. They are separated by the Wachesaw East golf course. The ninth fairway runs along one side of the formerly-surplus property.

Property next to the existing park is up for rezoning this month from residential to commercial use. So is another parcel on Pond Road that is currently zoned “forest and agriculture.” Both parcels are owned by Tidelands Health.

“There has been major development that has gone on in recent years, and there is still development that is going on,” Summers told the council. “Tonight is our chance for you to really listen to the people in Murrells Inlet and on Pond Road, who’ve been there and witnessed the changes.”

Council Member Everett Carolina liked the idea of an environmentally-oriented park. Even the smallest areas of his rural district have community parks, he added.

“I think we need to have a sit-down and some discussion on future use for that area,” Council Member Raymond Newton said. “It appears that none of them want this to be turned into another residential area.”

As he walks the property, poking the ground in front of him with a snake stick, Hills says he isn’t asking the county for money to develop the park. He understands that the same budget shortfalls that have the county selling surplus land are a factor in park improvements. He’s resigned to the likelihood that will be a community initiative.

But having the land gives the community options, he says. “Why would you sell it?”