Resolution on comments gets people talking 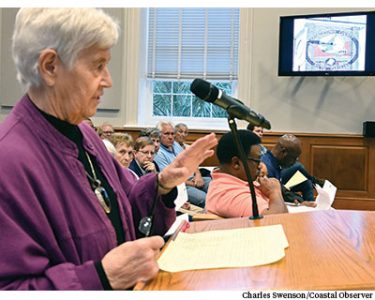 Karen Yaniga addresses the council about the need for a traffic signal system for emergency vehicles.

But the public had something to say.

The resolution by Council Chairman John Thomas was proposed in response to complaints that followed a call by former Council Member Bob Anderson to do away with or modify the 30-minute comment period at the start of each council meeting. Anderson chastised the council for not defending county staff from complaints made during the sessions, saying that led to the retirement of the county administrator and finance director and the decision of the county attorney to take another job.

Anderson also said the council should have stood up for Austin Beard, the District 5 council member who resigned last year after the county Board of Voter Registration and Elections ruled he no longer lived in his district. The ruling followed a complaint by the local chapter of the NAACP and was a topic raised by speakers during the comment period.

Anderson called the Beard episode a “lynching” and called his critics, both black and white, a “mob.”

“Thank you for reinforcing the fact that public comment is very important,” said Karen Yaniga, who went on to renew a pitch for the county to adopt a system to let fire and rescue vehicles control traffic signals. She and a group of residents have worked for three years to convince the council to fund the project.

Beverly Sullivan, a member of the citizens group Keep It Green, also told council she appreciated the chance to speak. She invited members to a program at the Waccamaw Library where the group will talk about land-use issues on the Waccamaw Neck.

Fred Williams, who lives in Georgetown’s west end, called on council to do more for that area. “Once you cross Fraser Street in Georgetown there’s a vast disparity in goods and services,” he said. “Spend the money where the need is the greatest.”

Neal also reminded the council of the importance of single-member election districts, which he thought Anderson wanted to abolish, in providing equal representation across the county.

“It continues to come up with the Austin Beard situation,” Neal said. “I don’t think we need to talk about that anymore after tonight.”

Wesley Gibson, an NAACP member, told Thomas “that statement is unacceptable in our community.” He called on the full council to issue an apology for the “hateful words spoken by Mr. Anderson.”

Gibson also pointed out that Beard was up for reappointment to the county Economic Development Alliance. He also noted that Beard had nominated himself for that position while on council. “This is a classic case of conflict of interest,” he said, claiming that it violated the county’s ordinance on appointments. “This is a case of County Council being out of control.”

Thomas said after the meeting that the alliance is not a county commission; it is a state-registered nonprofit that supports its economic development efforts.

Still, Council Member Raymond Newton, who now represents District 5, later tabled his plan to reappoint Beard. He said before the meeting that Beard had done a good job.

Newton has also been the subject of criticism by the NAACP during the comment period after a poll manager in Andrews said he was harassing her during the December GOP primary for sheriff. The incident prompted the county elections board to issue a notice to local law enforcement agencies reminding them that state law gives poll managers police powers at polling places during elections.

Newton said he wasn’t trying to make a statement by reappointing Beard, but added, “I knew some people might think that.”