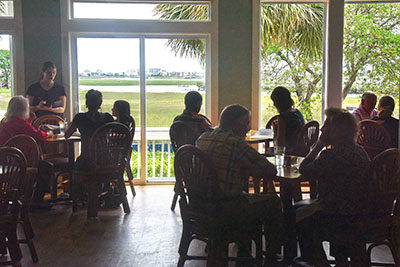 The variance for Capt. Dave’s Dockside requires maintaining green space on the marsh.

A Murrells Inlet restaurant owner will get another chance to change the conditions on a variance that was issued 11 years ago after three hearings by Georgetown County.

The owner of the former Capt. Dave’s Dockside wants to be able to build a deck between the restaurant and the Marsh Walk in an area that is currently limited to green space. David Owens closed the restaurant last year, but it is now leased to Catfish Johnny’s.

“Everybody has benefited in that boardwalk except Catfish Johnny’s,” said Robert Cox, the former county building inspector, who now represents Owens.

A variance in November 2006 allowed Owens to build a porch and stairs on his newly-built restaurant. He had torn down the original building that his family had owned since 1975. It was replaced with a modular building. It met the 50-foot setback from Business 17, but the engineer who located the building didn’t account for the steps or a ramp to access the building that needed to be raised to meet flood regulations.

The county Board of Zoning Appeals twice denied Owens’ request for a 5.9 foot variance. At the second hearing, 15 people, including the pastor at Belin Methodist and the local fire chief, spoke in favor of the request. It was denied when the board tied 2-2 on a motion to grant relief.

At a third hearing, the chairman, Lee Hewitt, proposed an amendment that the variance to the front setback be conditioned on Owens leaving the green space at the back of the restaurant undisturbed. It passed 4-3.

“When people are desperate, they’ll do almost anything to get what they need,” Cox told the current appeals board last week. He was building inspector at the time the restaurant was built. “Someone got the dimensions wrong,” he said.

Cox said he didn’t know why Hewitt offered the amendment, but said it was unfair.

“I remember it was a compromise,” Hewitt said this week. It was a way to get the variance approved so Owens wouldn’t be forced to reconfigure the building.

The conditions of the variance created a hardship, Cox told the appeals board. “The county has permitted enormous restaurants to build right up to the boardwalk,” he said. “You can touch people as you walk by.”

But not at Catfish Johnny’s. There is a boat slip behind the restaurant that creates a horseshoe bend in the Marsh Walk. It wants to add a 470-square-foot deck with additional seating that would extend to the edge of the boardwalk.

“We’re not really asking for anything that hasn’t been granted in the last 12 years,” Cox said, although because it is a variance from a variance, “this is an unusual request.”

The request drew opposition from members of the group Preserve Murrells Inlet, which filed a successful legal challenge to a 2017 variance that would have allowed an extension of a deck at the Costa Coastal Kitchen.

“This is clearly being requested to increase business,” Gary Weinreich wrote the appeals board, citing the other case as confirmation that economic hardship isn’t a criteria under state law. “There is no hardship existing because there is ample seating indoors and outdoors.”

Weinreich also pointed out that the property doesn’t comply with the 2006 conditions because the green space is occupied by vendors.

“It is not like this is unused property,” Boyd Johnson, the county planning director, told the board.

Wesley Bryant, the county attorney, agreed that the economic benefit was not grounds for a variance.

State law sets four criteria that must all be met in order to grant a variance:

• here must be extraordinary conditions due to the shape and size of the lot;

• he conditions are unique to that property;

• he application of the ordinance would create an unnecessary hardship;

•  variance won’t harm the public good or the intent of the ordinance.

“I think it would be hard for you to make a motion that met the four criteria,” Bryant told the board. “The bottom line is you have a state law.”

He also countered Cox’s claim that a variance would give Catfish Johnny’s what the other restaurants have. They don’t have a variance to the front setback, Bryant said.

Chris Olds, the board’s interim chairman, moved to deny the variance after none of the other four members offered a motion. (The board has two vacancies.)

“I appreciate your dilemma, but your dilemma appears to be a business dilemma,” Olds told Cox. “Something like this should have been priced into the sale.”

Bryant said the board would have to explain how a variance would meet the criteria in order for staff to write up a decision. “We can’t make up why it’s met,” he said.

Bonds moved to defer the request to allow Cox to argue in writing how the variance meets the criteria. The vote was 4-1 with Olds opposed.