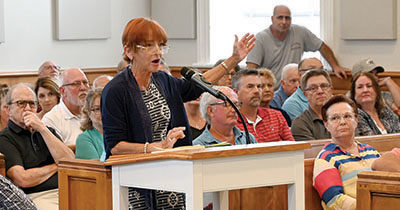 Mary Beth Klein asks planners to preserve the recreational zoning for the site.

A campaign to save the former Litchfield Racquet Club has now shifted direction, with a coalition of area residents calling on the county to preserve the site as open space. About 75 people showed up at the Georgetown County Planning Commission meeting last week even though a plan to build 108 one-bedroom condos had been withdrawn. Speakers told the commission they are concerned that a zoning change for the racquet club “planned development” to allow residential use on property designated for recreation would set a precedent for redevelopment on area golf courses.

The condos would have been the maximum residential development allowed on the 8.8 acres, a net density of 16 units an acre. The property was originally zoned for four units an acre like the neighboring Litchfield Country Club.

Trey Smith, a partner in Wimbledon Village, which has an option to buy the property from Founders National Golf, said they are now working on a single-family development. “It’s a little more challenging,” he said. “There are a lot of things we need to think about.”

One feature of the project will be allowing pedestrian, bike and golf cart access to the adjacent HealthPoint facility and Stables Park tennis complex. “We feel like that would be a nice thing for the whole community,” Smith said, adding that would provide an alternative for country club residents as well as those in the new development.

County planning staff had recommended the commission deny the zoning change for the condos, citing the conflict with the current land-use plan, the high density and the impact on traffic at Highway 17 and Country Club Drive. The staff also pointed out the 1.4-acre stormwater retention pond in the condo plan would require cutting 30 oaks that are currently protected under the tree ordinance.

Smith said that was the first time he had heard of someone complaining that a stormwater system was too big. But he has read all the objections submitted in writing to the county about the condo project, which run to over 50 pages. “I’m taking that to heart,” he said.

Although the commission did not hold a hearing, it took comments for 15 minutes at the start of the meeting.

“This has been a very painful learning experience for many in our community. There is, however, one good thing that has come out of this distress. It has united all of the communities on the Waccamaw Neck,” Marla Hamby, a former racquet club member, said. “Trey Smith has awakened a sleeping giant and caused a modern-day miracle: Republicans and Democrats working together.”

Beverly Sullivan, a country club resident who is on the other end of the political spectrum from Hamby (whose car has a sign on the trunk reading “Build The Wall”), told the commission “our recreational, public-use lands are in jeopardy.” She reminded the commission that there is no requirement in the zoning ordinance to make projects “financially feasible for any developer.”

Opponents had put up signs saying “Stop The Condos.” They are now putting out bumper stickers saying “Keep It Green.”

Mary Beth Klein told the commission she was attracted to the area because of the tennis and the commitment of residents to protecting the environment. “Today it’s the sale and rezoning of the land that was once the Litchfield Racquet Club. Tomorrow it could be the golf course at Litchfield Country Club, at River Club, at Founders Club, at Pawleys Plantation,” she said. Those courses are also owned by the Founders Group. “This could set a very serious precedent.”

Klein also said “very serious investors want to take this land and bring it back to be used for what it was originally intended, but our hands are tied as long as this discussion about rezoning continues.”

Smith disputed that this week. “They pay lip service to ‘we want to keep it open,’” he said. “The narrative has been that we are unwilling to come to some sort of resolution.”

Smith said he offered to sell the buyout group nine clay courts, the clubhouse, parking lot and related infrastructure earlier this month. “Our last proposal that was flatly rejected was extremely reasonable,” he said.

Nine courts aren’t enough to develop the kind of tennis center the buyout group envisions, something they say would draw tournament play.

“Tennis is very profitable,” said Blaine Harvey, who coaches the Waccamaw High tennis team. But he added that the preservation of land zoned for recreation is more important.

Smith said he understands the sentimental attachment to the racquet club. He plans to keep the clubhouse as a commercial use in the mixed-use development. He said that mix, and the shops and health facility within walking distance are what make the property attractive.

“What I plan to do is going to fit in well,” Smith said. “I think that will go a long way to address the community’s concerns.”