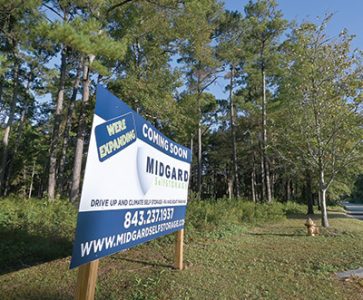 Neighbors raised concerns about the proposed facility and whether the application followed the county’s rules.

A plan to build an 11,000-square-foot self-storage on property zoned for 20,000 square feet of office space failed to win final approval from Georgetown County Council this week after area residents questioned the need for another storage facility and its location in a traditionally Black neighborhood.

“What struck is when the Planning Commission voted this down twice,” the Rev. Johnny Ford, whose family owns adjacent property, told the council. “I’m asking myself, why am I here?”

Last month, the council approved the second of three readings of the zoning change requested by Midgard for a “planned development” just north of the Pawleys Island Post Office.  Council Members Bob Anderson and John Thomas were opposed.

When the issue came up for a third reading, Council Member Raymond Newton’s motion to approve the request failed to get a second.

The vote followed a public hearing on the County Council’s redistricting plan in which residents emphasized the need for council members to listen to their constituents.

Ford and his wife, Lynne, who serves on the school board, told council that area residents who oppose the storage facility felt that they were being ignored.

“When they speak up, nothing ever happens,” Lynne Ford said. “Their homes are just as valuable as a $2 million home.”

A storage facility proposed for a nearby site on Waverly Road  in 2019 was dropped after it failed to win approval for a variance from the county’s design standards for commercial buildings on Waccamaw Neck.

It also drew opposition from neighbors.

“I don’t know the reason why every time they want to build something it’s always in the Black neighborhood,” said Carlethia Jenkins, a cousin of Johnny Ford’s, whose family owns property adjacent to the Midgard site. “Please don’t let them put another storage facility in our area because we don’t need it.”

Cindy Person, chief counsel of Keep It Green Advocacy, represented the neighbors. She told the council that the project was an example of an out-of-state firm looking to benefit at the

expense of the community.

“This encroaches on a historic and culturally significant minority community,” she said.

In a letter to the council, Person also challenged the request on procedural grounds. Key among those was the fact that Midgard requested the change in October and was recommended for denial because Planning Commission members were concerned it would add to traffic on Library Lane.

The company withdrew the request before it went to County Council, changed the design to provide access through Midgard’s existing storage facility and made a second rezoning request.

Person said that violated the provision in the zoning ordinance that allows only one rezoning request for a parcel every 12 months.

She also said the ordinance requires that all the owners within a planned development join in a request for a change. One of those owners, South State Bank, objects to allowing self-storage.

Helen Baldwin, who represented the bank, told council that South State thinks the change will reduce the value of its property.

“Once the zoning is changed, it’s virtually impossible to reverse,” Baldwin said.

She also noted the lack of public support for the change.

“If the need for this change is so great, why does the issue have no public support,” she asked. “No one has come out in favor of this.”

James Brooks, Midgard’s project manager, told the Planning Commission that the adjacent storage facility is near its capacity.

At this week’s council meeting, Anderson also questioned the need for another storage facility.

“Is that something we’re taking a hard look at in the future?” he asked.

Holly Richardson, the county planning director, said the county doesn’t restrict uses because they are prevalent.

But she added that the staff is looking at additional regulations that will cover the appearance and parking requirements for the facilities.

Newton asked Richardson to explain the difference in traffic that would be generated by the offices that can be built under the current zoning and the proposed storage facility.

“What would be the visual aspect from the nearby property owners?” Newton asked.

“It would be difficult to say for sure,” Richardson said, but Midgard proposes leaving existing vegetation around the perimeter of the property.

“So there is a buffer totally around the property,” Newton said.

His motion to approve the request was met with silence.