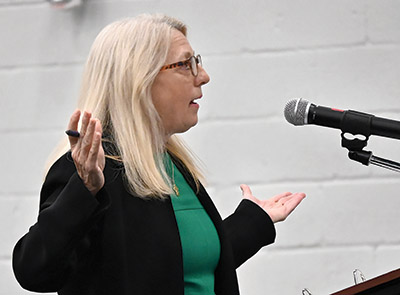 Cindy Person, who chairs Keep It Green, said the outcome of the vote was unclear.

A thousand names on petitions, hundreds of emails and a steady stream of objections raised at public hearings shifted one vote on a request to rezone residential property along Highway 17 to create additional lots.  Whether that was enough to change the outcome is unclear.

Georgetown County Council voted 3-2 this week to change the future land-use map from low to medium density for 14.8 acres along Highway 17 near Waterford Road. The map change was required before the council could approve a request by the owner to change the zoning from half-acre residential to residential with 10,000-square-foot lots.

But Council Member Everett Carolina abstained, so the vote was not a majority of the members present as required by the council’s rules of procedure.

Those rules state, “No ordinance or amendment shall be adopted unless at least a majority of the members present shall have voted for its passage on second and third readings.”

Louis Morant, the council chairman, recused himself from the discussion and the vote because his law firm has represented the property owner, Benjamin Goff.

The change and the rezoning drew opposition from the citizens group Keep It Green and from residents of The Colony, a “planned development” that was rezoned to allow 2.75 units an acre and lots as small as 8,000 square feet.

Anderson, who voted for that change in 2013, said the difference was the planned development zoning capped the density.

The rezoning at the Goff property could end up doubling the number of people living on that tract, he said.

“We have a population explosion on the Neck,” Anderson said.

Goggans confirmed with the county planning director, Holly Richardson, that the likely increase in lots would be 12 to 15 for a total of 40 rather than the 60 lots that opponents claim.

Carolina, who voted for the change in the density and the zoning at second reading, said he thought the information had changed since the Planning Commission voted 5-2 over the summer to recommend the change. He agreed with the opponents that there should be a plan attached to the request.

Since the request only changes the zoning, the owner isn’t required to submit a development plan. If the property is subdivided, the plan will come before the Planning Commission and the council for approval.

“It may revert back” to the current density when a plan is created that accounts for roads, stormwater ponds and wetlands, Carolina said.

After the 3-2-1 vote, Johnson, who chaired that portion of the meeting, looked to county attorney Jay Watson.

“So what does that mean?” she asked.

“Simply let the record stand at that,” he said.

About 60 people who showed up for the meeting filed out before the actual rezoning vote.

That passed 3-2, but Carolina had left his seat. When he returned, he said he had abstained again.

When Morant reclaimed the gavel, he asked for a break to confer with Watson and Administrator Angela Christian.

Watson said that following the model rules of the Association of Counties, the two measures passed because they had a majority of the members voting.

Thomas, a former council chairman, said afterward that the vote needed to be reviewed.

The council rules say the model rules apply only when there is no county rule that addresses an issue.

“This is a complex legal issue that does not lend itself to an easy or quick answer,” said Cindy Person, an attorney who chairs Keep It Green.