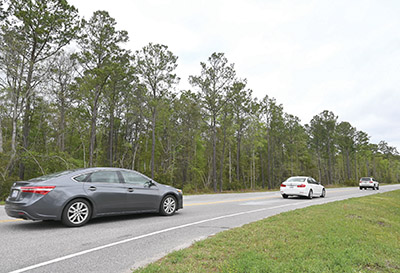 The property could have 17 driveways on Petigru Drive under the current zoning.

A request to increase the number of residential lots that can be developed on a tract near Stables Park will be up for review by the Georgetown County Planning Commission this month. The rezoning comes at a time when the county is facing a lawsuit from residents over a rezoning that increased the potential number of dwellings that can be built on a tract on Highway 17 south of Pawleys Island.

Old Kings Highway LLC, whose members are David Gundling and Guerry Green, are seeking county approval to rezone 9.4 acres on the corner of Petigru Drive and Martin Luther King Road from “residential half-acre” to a “flexible design district.” The current zoning would allow 17 lots. The plan calls for 26 lots.

“It’s like what’s across the street,” said Holly Richardson, the county planning director.

On the opposite side of Petigru Drive is Parkside at Pawleys, a 36-lot subdivision created by D.R. Horton, a national homebuilder. That property was already zoned “general residential.”

Documents provided to the county show that work on the 9.4 acres, called the Retreat at Stables, was done for Sabal Homes of Mount Pleasant, a homebuilder acquired in 2019 by Toll Brothers, another national firm. It plans to build the 26 houses on an interior street. The lots would be no smaller that 6,000 square feet, the minimum allowed by the county.

The citizens group Keep It Green and residents in The Colony sued the county earlier this year after County Council voted to rezone 14.8 acres adjacent to The Colony from “residential half-acre” to “residential 10,000-square-feet.” The groups claimed that the county failed to follow its own procedures and violated the land-use element of the county’s comprehensive plan by changing the density on the tract from low to medium.

“In this case, the comprehensive plan has a medium density designation,” Richardson said of the Petigru tract.

The planning staff is still working on its report to the Planning Commission, she said.

Keep It Green is also studying the request, said Cindy Person, the attorney who represents the group.

Gundling said he expects that Keep It Green will oppose the request. But he said there is another difference between this request and the rezoning at The Colony.

In that case, “you really don’t know what the thing’s going to look like,” he said.

As a “flexible design district,” the number of lots and their location is specified along with the amount of open space.

The flexibility in the district is intended to allow developers to come up with plans that “will protect the natural and human environment and facilitate an improved use of land.”

Gundling said the zoning change would allow the development to have a single entrance on Petigru Drive rather than 17 potential driveways if developed under the current zoning. In addition, wetlands on the property would be protected through restrictive covenants controlled by a property owners association. It would also maintain common areas and stormwater infrastructure.

“There will be a little more open space than if you had individual lots,” Gundling said. “We think it’s going to potentially be a nice subdivision.”

The Planning Commission meets April 21 at 5:30 p.m. in County Council chambers at the old courthouse on Screven Street.

Also on the agenda are:

• a request to change the zoning from residential to commercial for a .8 acre lot off Highway 17 between the Pawleys Pointe neighborhood and the Speedway convenience store. Two adjoining lots with highway frontage are  already zoned commercial;

The property off Blockade Drive is adjacent to an existing R-10 zoning district.

Correction: This story was updated from the print edition to correct the date of the commission meeting, which is April 21, not April 14.