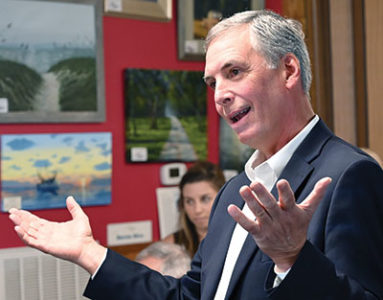 U.S. Rep. Tom Rice outlines his position to constituents at a meeting in Litchfield.

U.S. Rep. Tom Rice sees growing opposition to offshore drilling among the state’s congressional delegation, but he told constituents last week that a bill that would ban oil and gas leases on the Atlantic coast has no chance of passage.

The best chance to prevent offshore drilling is to get President Trump to drop the idea, Rice said.

The federal Bureau of Ocean Energy Management released a “draft proposed program” for oil and gas leases in January. After taking public comment, the agency is preparing a “proposed program.” The goal is to have a “final program” approved by the end of the year.

The leasing process for the Outer Continental Shelf was initiated by the Trump administration in 2017 as part of the America-First Offshore Energy Strategy. The area is excluded from the current plan, adopted during the Obama administration.

“I met with Ryan Zinke, who was then secretary of the interior, three times about we wanted South Carolina excluded,” Rice, a Republican who represents the 7th Congressional District, said. “They’re very aware of our position.”

Zinke resigned in January and was replaced by his former deputy, David Bernhardt.

Conservation groups and municipalities, including the town of Pawleys Island, have filed a challenge in federal court to permits that would allow seismic surveys off the coast to find oil and gas deposits. Rice noted that the state has joined that suit. “I think we’re in a pretty good spot,” he said.

Rep. Joe Cunningham, the 1st District Democrat, introduced a bill in January that would ban offshore drilling on the Atlantic and Pacific coasts for 10 years. It has nine co-sponsors, including two Florida Republicans.

But he added, “It ain’t going anywhere because it would take a majority of Congress for it to pass and I don’t think folks that want to drill in other areas are going to support banning in one area.” The bill is now in subcommittee. Even if it passed, the president would veto the measure, Rice said.

“What we’re going to try to do is get the president off of drilling in the Atlantic. I don’t think he really is all that anxious to do it anyway. He doesn’t want Florida involved in it,” Rice said, referring to the Mar-a-Lago Club that Trump owns. “And I don’t think it’s practical. I mean, oil now is $50 a barrel. When I got elected, it was $100 a barrel.”

Since then, the four-term congressman said, “they’ve got more oil than they know what to do with. The United States is a leading producer of oil in the world.”

At the constituent meeting held at Applewood’s in Litchfield, Peg Howell, a leader of the group Stop Offshore Drilling in the Atlantic, thanked Rice for his efforts and asked if he was able to convince other members of the delegation to oppose drilling, particularly Senators Lindsey Graham and Tim Scott. “The North Carolina delegation would certainly benefit from your leadership on the issue,” she said.

A survey this month from the National Resources Defense Council showed only three of 10 members of the North Carolina delegation oppose drilling.

Rice said he met with Rep. David Rouzer, a Republican who represents the coastal 7th District in North Carolina. Rouzer has said he favors drilling with proper safety measures as long as it occurs more than 30 miles offshore.

In South Carolina, “Wilson’s come with me and I’ve met with Timmons a couple of times,” Rice said. “I suspect that he’ll end up coming with us.”

“Jeff Duncan, you’re not going to change him. You can do what you want to,” Rice said of the 3rd District representative in the Upstate. “I don’t think Norman’s going to turn,” he added, referring to Ralph Norman in the 5th District, which includes parts of the Midlands and the Upstate.

The meeting gave constituents the chance to raise a variety of concerns. Immigration prompted a couple of questions.  Rice said he favors changing to a system that puts a priority on skills and education rather than family ties for immigrants.

Rice said he opposes tariffs, but he supports the president’s use of them to influence foreign policy.

Update: This article was changed from the print version to reflect that Rice is in his fourth term, not his third term.