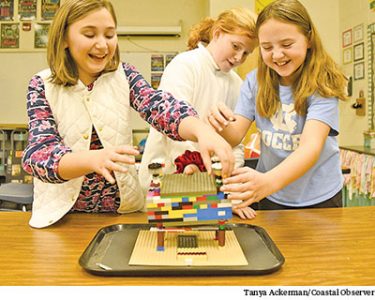 A group of fifth-graders from Waccamaw Intermediate School hope that a house that rises and falls with the tide will help them win a FIRST Lego League state title on Saturday.

The team, called the R2 Designers, came up with the idea for a “Hover House,” a structure built on a stainless steel platform and pylons like a floating dock and lifted up and down by flood waters.

“I’m super proud of them,” said Beth Goude, a teacher at the school and the team’s coach. “I call them rock stars all the time.”

The Hover House is the team’s “innovation project” for the competition. Teams were tasked with identifying a problem having to do with transportation, accessibility or natural disasters, and then researching and designing a solution.

“We started talking about the flooding that had hit here recently,” Goude said.

While working on FIRST Lego League engineering workbooks, the kids came up with the idea of a platform to stabilize a house that was built on the side of a mountain, and pilings to raise a house off the ground. Those two ideas were merged into the Hover House, which is attached to pilings by shafts that run through decks around the house. Large floatation devices underneath the house deploy when water strikes them.

“We just put those two ideas together,” said Matthew Volante.

“We had to figure out what we wanted to use to attach the pylons to the house,” said Jairo Ramos. “We first thought chains, but we realized it wouldn’t work because it would be shaking around too much. So we switched to U-bends.”

“We decided it would be more stable and it would be better if you wanted it on the beach because it would hold more wind,” said Lauren Ratz.

The team also had to build and program a small robot that will have two-and-half minutes to successfully complete a series of missions on a table.

“The funnest thing is working with the robot and programming it to run missions,” Connelly said.

“It’s kind of hard, but since I have Connelly right by my side to help me, it’s not that hard,” Aden said.

Although Matthew and Skylar Schoen are the team’s primary researchers, Skyler said all the work is a team effort.

“Even when we were just writing the script we were all sitting around a table and talking about it,” she said, adding that everyone provides input on the project and the robot.

When presenting to the judges, the fifth-graders will recite from memory a script they’ve written, show off displays they’ve created, and sing a reworked version of the “The Addams Family” theme song they’ve written.

When the team members were tossing around ideas for the a song, Jessica Hammel suggested “The Addams Family” and kept singing the music.

“My brother was in a show and it was ‘The Addams Family,’” she said. Attending robotics competitions with her brother, Ben, was also the reason Jessica  wanted to join the team.

“We knew that old people would be watching us and listening to us so we had to think of something they knew when they were kids,” said LillieDanysh.

She joined the team because she loves Legos.

The R2 Designers is one of 24 teams competing in the state tournament for students in fourth through eighth grades. The scores for the project, the robot, and the team’s knowledge of FIRST Lego League’s core values will be combined to decide a state champion.

The team had only been meeting and practicing for about six weeks when it competed for the first time and won the project award at the Grand Strand Qualifying Tournament in Myrtle Beach in November.

“For them to do that in that amount of time, I was pretty blown away,” Goude said.

R2 Designers’ project is now one of 24 in the running for the Global Innovation Award at the state tournament.

A good showing by the team at the East Regional in Summerville last month meant they also qualified to compete for a state title.

“We bombed [the robot] and came in 15th, but the reason we went up is because we did so good in the other things,” Aden said.

Had they not qualified for state, R2 Designers would only have competed for the innovation award on Saturday.

“Each competition you go to they expect more and more from you,” Skyler said. “This is going to be a competition where if we win, we’re going to walk away really proud … because it’s a very big honor for this school to go to state.”

“I think they’re going to expect a lot more of us than the regionals,” Vaughn said. “I think it’s going to be a lot harder.”

“It’s more pressure than the others ones, but we shouldn’t go in nervous, we should go in prepared for whatever is going to happen,” Ratz said.

Waccamaw Intermediate started in First Lego League in 2012. Students interested in joining a robotics team go through an application process and answer a series of essay questions. Goude and Melissa Cahill, the school’s other FIRST Lego League coach, use a guide to evaluate how the kids answer.

“We don’t want a team full of children who are only interested in robotics because it’s so much more than robotics,” Goude said.

This year the school had three teams: the R2 Designers, and two sixth-grade teams, the Innovator Gators and the Gator Creators.

It was the first time since Goude has been a coach that the school split the teams by grade level. It worked out that way because Goude teaches fifth grade and Cahill teaches sixth.

“There were times during our class times that we could work on things,” Goude said. “It really helped. We knew it would be easiest to work with those students that we see every week.”

Goude said the most fun part for her about being involved in First Lego League is watching the kids grow individually, and as a team.

“Watching as a team goes from barely speaking to each other at the beginning because they’re all so shy, to now willing to dance and sing Addams Family songs to get their point across in a ‘Shark Tank’ situation,” Goude said. “It’s interesting to see the dynamic. [This] team meshed so well. It was amazing.”

The team members have also gotten to the point where Goude does not have to remind them to take into consideration what a judge might think. They’ve started doing that on their own.

“They’re starting to think like researchers and engineers,” Goude said. “It’s cool to see them grow.”

Other teachers have commented to Goude about the changes they see in the FIRST Lego Leagues students. Kids who used to be afraid to speak in class are now more confident.

The First Lego League state tournament is Saturday at Meadow Glenn Middle School in Lexington. It is free and open to the public. Competition begins at 8 a.m.