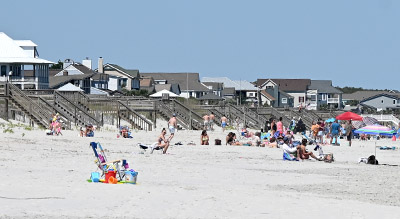 Beach house rentals are considered single-family uses by the county.

A North Litchfield couple who rented rooms in their house through Airbnb during the pandemic saw their property tax bill rise by $5,000, after Georgetown County denied their application for a residential tax assessment.

“I’d love to prove the point,” Seley said. “We got singled out.”

After the assessor’s office denied their application for a residential assessment, the couple appealed to the county Assessment Board of Appeals. The board voted 5-0 to uphold the staff decision.

The couple have now filed an appeal with the Administrative Law Court.

The issue began as a zoning dispute. At the start of the pandemic, the couple started renting bedrooms in their house on Airbnb.

They said in their letter to the Assessment Board of Appeals that their neighbor, County Council Member John Thomas, reported them to the zoning office.

Most of the houses in the neighborhood are vacation rentals, but the county still considers those to be residential uses, Richardson said.

“We don’t have regulations on short-term rentals. We don’t regulate how long you can rent for,” she said.

But when rooms are rented out, that becomes a commercial use.

They received an “order to remedy” from the zoning administrator in August 2000 and stopped renting rooms that fall. In March 2021, the administrator, Kristal Infinger, said the staff had learned the room rentals had resumed. She told the couple in a letter that they faced a fine for a zoning violation.

The couple told the appeals board that Thomas “has used his position as county councilman to bully and harass us for everything he can find.”

Thomas acknowledged that he and other neighbors were concerned about the activity, but denied using his position to deal with it. “I’ve tried to stay out of it,” he said.

“It started as a zoning issue and snowballed into this,” Seley said of the tax assessment.

At last month’s appeals board hearing, Susan Edwards, the county assessor, said it started with a phone call saying the property was being rented on Airbnb. Her staff investigated.

Under state law, property owners can rent their home for up to 72 days a year and still retain their 4 percent residential assessment. Edwards said her staff looked at the rental information on Airbnb.

The number the assessor’s office came up with was 117 days in the last tax year.

Altman and Seley said the county is misreading the booking data and the state law.

They told the appeals board that they relied on information from the S.C. Municipal Association that said they can rent rooms and retain their residential assessment as long as they are also living in the house. The 72-day limit only applies when the entire house is rented.

“That was guiding us,” Seley said. “Our interpretation was that 72 days meant the entire house.”

While it may have been a zoning violation, they said they didn’t think the room rentals should be counted. The couple also said that the information on the Airbnb website is deceptive because when they block out dates for personal use it appears that the property is rented.

In addition, Altman said that renting three bedrooms on the same night would show up as three nights.

“We really didn’t know it was different from what everybody else was doing,” Altman told the board.

Altman said she didn’t know how the company came up with seven, but said that is not longer an issue since they only rent the house as a whole.

Seley said this week that the legal appeal could be more expensive than the additional tax.

“It’s a tough road,” he said. “There’s no way that we’re being treated the same as everybody else.”