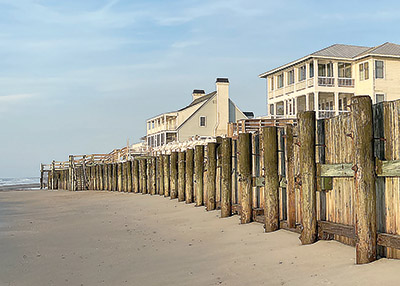 The project will create a dry beach in front of the seawall at all tidal stages.

A beach renourishment project will begin at DeBordieu this fall with construction of three rock and concrete groins to follow before spring. A state Administrative Law Court judge this week rejected a request from an environmental group to halt the work while it appeals the permits.

The DeBordieu Colony Community Association applied in 2017 for state and federal permits to place up to 650,000 cubic yards of offshore sand on 1.5 miles of beach at the south end of the community. The work includes the installation of groins to hold the sand.  The Coastal Conservation League challenged the permit, saying it doesn’t meet the state law that allows construction of groins only in areas with high erosion rates and where that erosion threatens existing structures. It also challenged DeBordieu’s claim that the groins won’t cause an adverse impact on the adjacent beachfront at Hobcaw Barony.

Judge Ralph K. Anderson III upheld the permit issued by the state Department of Health and Environmental Control in January. The Coastal Conservation League appealed that decision to the state Court of Appeals. The league asked Anderson to issue a stay on the implementation of the permit until the appeals court could rule.

In his ruling this week, Anderson said that a stay is not needed because DeBordieu has posted financial guarantees that will fund the removal of the groins if the permit is overturned. He noted that those guarantees are a condition of the permit and that the amount of the guarantee was increased as part of the settlement with the Baruch Foundation.

DeBordieu “supplied a letter of credit showing it can cover $1 million in costs associated with any remediation necessary as a result of mitigation for the groin impact – either reconstructing or removing the groins and renourishment of the impacted beach,” Anderson said in this week’s ruling.

The conservation league, which is represented by the S.C. Environmental Law Project, argued that a stay would preserve the status quo.

“The legislature has made it clear that in cases like this, preserving the status quo is not the default on appeal, it is the exception,” Anderson said.

In 2018, the legislature changed the rules to eliminate the automatic stay that blocked permits that were challenged in court. The legislation came from frustration among lawmakers in Horry County that the Coastal Conservation League was blocking road projects in court.

“Allowing projects to move forward makes sense in cases where actions taken pursuant to the lower court’s ruling can be adequately, and cost-effectively, reversed upon an adverse ruling on appeal,” Anderson said in this week’s ruling.

Preserving the status quo on the DeBordieu beach would mean preserving a situation where the beach in front of an existing seawall is impassible for about half the day, Anderson said. The proposed project “will remedy those restrictions allowing the beach to be passable in front of the bulkhead at high tide,” he said.

While the Coastal Conservation League argued that its case would become moot if the project is completed, Anderson disagreed. He said the league based its argument on a previous case in the state Supreme Court where the decision was not published and so “has no precedential value.” Another case was from Family Court. “I do not find it persuasive,” Anderson said.

The conservation league also raised issues of a violation of the constitutional right to due process. That is beyond the scope of the Administrative Law Court because it is part of the executive rather than the judicial branch, Anderson said.

DeBordieu applied for the renourishment and groin projects following a vote by the community association to create a beach fund through assessments on property owners. Over 17 years, it is expected to generate up to $12 million. “Removal of the groins in the event of a reversal is feasible, and it has the finances to undertake the removal,” Anderson said.

It would take about four weeks to remove the groins, according to a court filing by Steven Traynum, the project manager for Coastal Science and Engineering.

Anderson’s ruling also addressed the possibility that his decision to let the work go forward would also be appealed. If reversed, Anderson said the Coastal Conservation League should be required to post a bond of $13.5 million to cover the cost to DeBordieu if the permit is ultimately upheld on appeal.

The renourishment that DeBordieu plans to start in November is the last that can be completed before the erosion changes the beach profile enough to require a new project design, according to court documents.

Coastal Science “believes that if the scheduled renourishment goes forward in November of this year, construction of the groins will be possible for about six months thereafter before erosion will make the project no longer feasible,” Anderson said.

DeBordieu would have to seek new permits and face possible legal challenges, he said.

If DeBordieu does the renourishment project without installing the groins, it will lose $632,971 worth of sand to erosion in the first year and $740,906 worth of sand in the following years, according to Traynum.

DeBordieu has argued that the groins are necessary to maintain the renourished beach and reduce the ongoing cost of renourishment.

The loss from delaying the project would add up to $13.5 million, Anderson said.

The conservation league called the figure “absurd,” but Anderson said it offered no evidence to the support that claim.