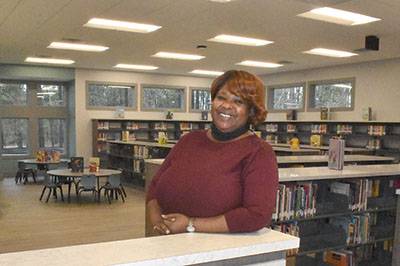 Sharea Drayton, manager at the new branch, which was 20 years in the making.

Seven years after a group of residents started talking about bringing amenities to the southern part of the county, the doors of the new Southern Georgetown Community Library opened for the first time last week.

The Rev. Teddy Wilson said it was an emotional moment to finally be standing inside the library.

“It is beautiful. It is beyond what I even imagined,” said Evelyn Grayson, a retired teacher. “I’m so excited.”

Wilson and Grayson are members of the Southern Georgetown Leadership Group, which was formed in 2014 to improve the lives of residents in the Sampit, Santee and Saints Delight areas of the county.

“We wanted to bring opportunities to the young people as well as senior citizens, but especially young people in the Southern Georgetown communities,” Wilson said. “Children, especially in my area, they weren’t able to, because of transportation, get to the library in Georgetown or Andrews. It was a disadvantage for them.”

It’s a little over 15 miles from the new branch to the main libary in Georgetown, about the same distance as the Waccamaw Library is from Georgetown.

“There was not a resource for the children in the area. Finally the children are going to get what they deserve,” Grayson said. “It’s everything you would want in a library.”

When the leadership group started, a library was one of many options they discussed.

“We wanted to come up with some ideas for things that would help our community and help our young children so they could have a better future and develop ways that they can be on an even plane,” said Clarice McKnight, a member of the leadership group who serves on the county library board.

Supporters say it’s more than just a library. It’s also a place for people to meet and socialize.

“There’s really not much out that end,” said Sandra Johnson, who represents the area on the Georgetown County School Board. “This will certainly be more centralized and more nonpartisan.”

Sharea Drayton, the branch manager, said the area residents will no longer have to drive to Georgetown for access to books, computers, printers or a fax machine.

“You can just come down the street and use these things,” Drayton said. “It’s a lot of resources for a community.”

One of the things Drayton is most looking forward to is getting to know the people who come into the library on a regular basis.

“For me, that puts a smile on our faces,” she said. “You get to know their habits. What they like to read and what they don’t want to read.”

Drayton started her career working at the Carvers Bay branch, where residents would bring homemade cakes for the staff.

A fifth library branch was part of the county’s Visions process, a plan to improve the quality of life for residents. It’s also been a goal of the library board for the last 20 years.

After a library was built in the Carvers Bay community in 2006, the focus shifted to the Waccamaw Neck and southern areas of the county.

When the recession hit in 2007, the county realized it could only afford to build one branch, Dwight McInvaill, director of the county library system, said. At that time, the Waccamaw Library was the busiest and oldest branch.

By the time the new Waccamaw Library opened in 2015, McInvaill had been getting input from the leadership group for months about a new library and its location.

“We listened to what they wanted,” McInvaill said.

Sel Hemingway, the county administrator at the time, was an early supporter and worked with the leadership group to find and purchase a 3-acre property in the Sampit community.

In 2015 and 2016, McInvaill hosted public meetings and worked with the Frances P. Bunnelle and Coastal Community foundations to secure grants to purchase the opening day book collection.

In 2017, McInvaill presented plans to County Council, which officially added the new branch to the county’s capital improvement plan. Once that happened, McInvaill started buying materials with money that he had been putting aside for years.

“We didn’t have opposition to this project,” McInvaill said. “Nobody said ‘this library will be like an outdated record store.’ Everybody’s been very, very positive and that’s been a true pleasure.”

The county broke ground in 2019 and hired Michael Walker of Tych & Walker Architects of Murrells Inlet to design the library and Coastal Structures to build it. Walker designed the Waccamaw Library and the county’s judicial center in Georgetown.

Then the COVID-19 pandemic hit and supply chains worldwide broke down. Coastal Structures couldn’t get windows, furniture or shelving.

“It was just an incredible situation for all of us. Everything went super slow,” McInvaill said.

Construction was finally finished late last year, but the opening was delayed while broadband was installed on Powell Road, where the library is located.

“If they don’t have the technology there’s no way they would be able to compete,” McKnight said. “It’s going to change our world. It’s going to brighten up the children’s future.”

“It will certainly be useful for the students,” Johnson said. “Even though they could go into Andrews or come into Georgetown, this will be closer and it will be more likely to be utilized a lot more.”

“During the pandemic, the children in our area have had difficulty with broadband,” Wilson said. “It’s going to be a great asset for them.”

There were also delays while phone lines and the fire alarm system were connected. And a few days before the ribbon cutting someone tried to steal the air conditioning units.

The 8,000-square-foot library cost a little over $2 million and includes computers, a large meeting room and two small meeting rooms, and story and game rooms.

The library has about 25 percent of its collection, about half of which was transferred from other branches and the county’s bookmobile. The Friends of the Waccamaw Library also made a donation toward the purchase of materials.

Usually a library opens with about 5 percent of its collection, McInvaill said.

“It will still look sparse but it will be better than I had earlier anticipated,” he added.

Before the library officially opened, neighbors began stopping by when they saw Drayton and her staff there.

“That’s a good thing because that tells me that they are ready to get in here and use the facilities,” Drayton said.

“It’s a very positive thing. It’s a safe environment for our youth and our senior citizens,” Wilson said. “It’s very valuable to the community.”

“The library is like a light. It’s like a beacon of civilization,” McInvaill said. “We think that civilization is complete in America. But it’s a very spotty thing.”