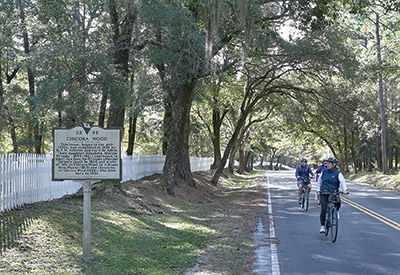 Trees along the route give it character, but also pose construction challenges.

It will cost $2.1 million a mile to build a multi-use path and related facilities along 23 miles of roads in the western part of Georgetown County, according to a feasibility study presented to County Council this week.

“This is not just a transportation project. This is a recreation and tourism project,” said Britt Storck, a principal in Alta Planning and Design.

The route would take in 12.2 miles of the Plantersville Scenic Byway, one of three roads in the state with that designation. It would run the length of Plantersville Road, cross Highway 701 and continue to the Choppee Regional Recreation Center.

It would eventually tie in with the county’s Rocky Point Community Forest on the Black River, which is the eastern end of a river trail being developed in conjunction with a new state park along the river.

The council approved $118,961 for the feasibility study in 2020 as a revision to the county’s 2017 bike path master plan. The funds were a portion of $500,000 for paths included in the capital improvement plan.

The top priority for bike paths in the plan was a path along Waverly Road to replace the sidewalk that runs from Waccamaw Elementary School to Highway 17. The county is now seeking state permits for that work.

Council Member Steve Goggans, who earmarked $1 million from a capital projects sales tax surplus to the Waverly Road project, said the county would get a quicker return on its investment to construct more bike routes on the Waccamaw Neck.

“I would be remiss if I didn’t speak to the needs of the Neck,” he said. “For about half of this amount of money you could fund the whole master plan for the Waccamaw Neck.”

That includes a bike path on Martin Luther King Road and a path along Kings River Road from Waverly Road to Waccamaw High School.

“That’s a place where you would get a direct return on your investment,” Goggans said.

There are about 15 former rice plantations along the Santee River on North Santee Road and Estherville Drive, which he said attract cycling clubs from Charleston.

“It’s almost a parallel situation” to Plantersville and its plantation tracts along the Pee Dee River, he said.

Council Member Raymond Newton asked if the project could help spur development in the area, where the county has agreed to spend federal infrustructure funds to improve water lines.

“We believe this could be an economic driver for the community,” said Ray Funnye, the county Public Services director.

Storck told the council that this is an ideal time to start a project such as this, formally known as the Plantersville Scenic Byway and Choppee Black River Trail. In addition to federal funds for infrastructure projects, it would be eligible for funding that improves access to services in under-served communities.

“Equity is of critical importance for many of these grants,” Storck said.

While some grants could require matching funds from the county, officials said the goal would be to find grants that don’t.

Even then, Administrator Angela Christian said there will be a cost to the county in resources just to prepare the grant applications.

The trail is “an opportunity to raise the standard of living in this community,” Christian said. “That’s an important part of the conversation.”

County staff will provide more information on the timing and work required for the grants. The council will then need to decide whether to move forward.

If it does, Storck proposed that the work be broken down into four phases, starting with the scenic stretch of Plantersville road. There is limited space in the right of way because of utility poles, drainage ditches and trees. The route also contains eight bridges that will need to be expanded or added to.

Along the route, facilities will be provided for parking and to share information about the area’s cultural and natural resources. That will help eco-tourism and promote awareness for the rural areas of the county, Storck said.