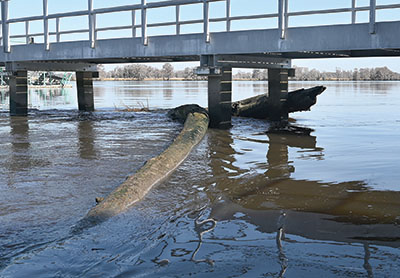 A tree washed into the Waccamaw River by rains in February got snagged at the Heritage Plantation Marina.

South Carolina lawmakers this week grilled operators of a series of dams in North Carolina about their responsibility for flooding in Georgetown and Horry counties over the last three years.

“There’s no lack of compassion here,” said Jeff Lineberger, director of water strategy for Duke Energy. “There is a lack of storage capacity. The reservoirs weren’t built for it.”

Duke operates two hydroelectric dams on the Yadkin River east of Charlotte. Cube Hydro, a subsidiary of Ontario Power Generation, runs four dams upstream near Salisbury, N.C. The river is part of the Pee Dee River Basin, which continues 188 miles from the dams to Winyah Bay.

Flooding caused by hurricanes has driven people out of their homes on the Waccamaw River and Intracoastal Waterway in Horry County. Those waterways back up because of water coming down the Pee Dee, said Lineberger.

Over the last year, when there were no hurricanes, heavy rainfall from a series of storms also caused flooding.

State Sen. Stephen Goldfinch of Murrells Inlet led the questioning at a hearing of the Joint House and Senate Agriculture Committee. “If I seem irritated, it’s because I’m irritated,” he told the witnesses. “Don’t take offense.”

He pressed the dam operators about the criteria they use to decide when to release water and whether they consider the  impacts on downstream areas.

“When we release water, it’s because we have no other choice,” Mark Gross, vice president of operations for Cube, said.

The dams operate under licenses issued by the Federal Energy Regulatory Commission, and Goldfinch questioned whether South Carolina should scrutinize those license renewals more closely.

“FERC is a big one,” said Ken Rentiers, the deputy director for land, water and conservation at the state Department of Natural Resources.

But Rentiers reinforced a point made by the dam operators that the licensing process typically looks at issues of low water flow, which can impact wildlife.

In the storms over the last year, “you’re talking about a volume of water that’s almost unprecedented,” he said.

Goldfinch asked Rentiers how much blame should be placed on the dams for downstream flooding.

Rentiers said the dams control 26 percent of the water in the Pee Dee River Basin, which covers 18,000 square miles.

The dam operators could help by providing more data and collaborating on flood models, Rentiers said.

He told the lawmakers that the state’s hydrologists have been at work on studies about flood management and are working with the state Office of Resilience that was created last year. The state isn’t ready to release those studies, Rentiers said. “Probably within a year.”

Lawmakers were skeptical of the dam operators’ claim that the record-setting rainfall is the only variable. “You’re blaming God,” state Rep. Case Brittain of Myrtle Beach said.

Lineberger said he was not blaming God, just the rainfall.

“We think we can be part of the solution, but this is not a Duke Energy problem,” he said.

“Pointing to Duke Energy and Cube is a red herring,” he said.

Lineberger also pointed out that the first priority of the operators during a storm is making sure the dams don’t fail. They have no choice but to let water flow out of the reservoirs.

Why can’t the operators reduce the water levels above the dams in advance of a heavy rain, Goldfinch asked.

A seven-day weather forecast isn’t accurate enough to make that decision, Lineberger said. If it’s wrong, the lack of water could affect municipal water systems that depend on the reservoirs.

And even if the forecast was right, the volume in the reservoir would only hold two to four hours worth of rainfall from last year’s peak storms, he added.

Goldfinch asked why the state rather than the dam operators should be funding river basin studies.

Since the studies would cover more issues that power generation, the state Public Service Commission might question the use of ratepayer funds, Lineberger said. But he added that Duke has a foundation that could help with funding.

“It’s a tough nut to crack. When you divert water from one area, it’s going to somewhere else,” he said.