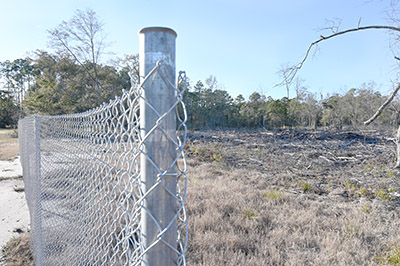 The site next to the elementary school was cleared in early 2020.

More than a decade after plans were created for new county ballfields at Waccamaw Elementary School, Georgetown County Council has awarded a contract for the work. It is one of the last projects in a capital improvement plan adopted by the county in 2008.

“It looks like we’re close,” Council Member Steve Goggans said before this week’s vote to award the $5.76 million contract to Ben Cox LLC of Andrews.

It was Goggans’ architecture firm that came up with the original plan in 2010, two years before he was elected to the council. The school district, which owns the property, asked for an update in 2017 that included a perimeter road around the school campus to alleviate traffic on Waverly Road.

That added to the cost of the project, which was budgeted for $3.5 million in the county’s capital plan.

When the project was first put out for bid last year, it came in far above the budget.

The perimeter road was dropped as his firm engaged in “value engineering,” he said.

Even then, the project was still over budget. Cox was the lowest of four bids. The highest was just under $7 million.

County Council agreed to take $400,000 from its local hospitality and accommodations tax revenue. It will cover the remaining $1.86 million with surplus revenue from a capital improvement sales tax that the county collected between 2015 and 2019.

The park will use up all of the sales tax surplus except for $6 million earmarked for a port dredging project, County Administrator Angela Christian said.

While this project was over budget, Christian said the county is having problems finding bidders for other projects because they are too small. The county is trying to bundle those to attract bidders.