Scenery with a slight image problem 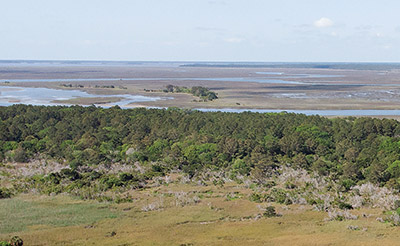 Salt marsh like this that borders North Inlet is obvious and protected.

Wetlands are a defining feature of the South Carolina coast, but they have an image problem.

Everyone is aware of the salt marsh. They are less familiar with bottomland hardwoods or Carolina bays, said Maeve Snyder, coordinator of the coastal training program for the North Inlet-Winyah Bay National Estuarine Research Reserve.

“There’s not single definition for a wetland,” she said.

Sometimes they aren’t even wet, at least not at first glance.

Snyder was one of the speakers at a weekend panel discussion of wetlands sponsored by the citizens group Keep It Green. The program coincided with the release of a draft of the natural resources element of the county’s comprehensive plan, a document required by state law that must be updated every 10 years. The draft proposes additional protections for the county’s wetlands, which are estimated to take up about 25 percent of its 815 square miles.

“Historically, people have thought of wetlands as waste areas,” said Duane Draper, who chairs the board of Keep It Green. “If you build on them and fill them in, it’s just going to create problems for the neighbors.”

Wetlands fall under the jurisdiction of the state and federal government, but Snyder said many coastal communities are doing more.

“Wetlands have sort of a baseline level of protection at the federal level from the Clean Water Act,” she said. “State and local governments are able to add an additional layer of protection.”

Georgetown County requires that buildings be set back at least 15 feet from the edge of any saltwater wetland, using the jurisdictional line set by the state Department of Health and Environmental Control to determine that boundary.

If that setback is used for a lawn, particularly one that gets regular applications of fertilizers and pesticides, it defeats its purpose, Snyder said.

What Georgetown County has proposed in its natural resources plan is a wetlands buffer. It would not be limited to the salt marsh or the Waccamaw Neck.

“Quite a few coastal communities in South Carolina have that protection,” Snyder said. “A buffer ordinance would give that wetland some breathing room.”

Depending on the type of wetland, it can serve as a buffer to storms, a sponge to soak up flooding or a home to endangered or threatened species.

Sel Hemingway, the former county administrator, was invited to participate because someone had heard about his bathtub analogy.

During his tenure, the county had six federally-declared disasters in six years.  That included what came to be known in the state as the “1,000-year flood” in 2015  and Hurricane Florence in 2018. It was the latter storm that produced the prediction that floodwaters at the entrance to Winyah Bay would reach 14 feet.

“All four entrances to the city of Georgetown would be under water,” Hemingway said. “The Neck would have been isolated.”

“You’ve got so much marshland between the Waccamaw and Pee Dee rivers,” Hemingway said.

Despite the rain that fell across the Winyah Bay watershed, the third largest on the East Coast, the bathtub didn’t fill up because it didn’t have any sides, just the wetlands that allowed the water to spread out.

Snyder, who spoke at the meeting via video, said afterward that the goal of stormwater management is to slow the water down rather than move it as quickly as possible through man-made structures. Extending wetland protection, particularly buffers, to freshwater wetlands, would help achieve that, she said.

“The tiny little depression behind your house that may be dry 75 percent of the time? You may not want to build right next to it because that’s where the water’s going to go,” she said.

That’s just the sort of wetland that people overlook.

“I think there is an awareness problem,” Snyder said. “The salt marsh is obvious.”

To Sandra Bundy, it isn’t obvious enough. She grew up on Murrells Inlet and now serves on the county Planning Commission.

She cited a study by Coastal Carolina University in 2013 that put the value of the marsh to the Murrells Inlet economy at over $720 million.

Yet, the marsh is threatened by the non-point-source pollution that comes from nearby development. The state created a special-area management plan for the inlet in 2014.

“Implementation has been a bit soft,” Bundy said. “One of the things that concerns me is the thought of losing our marsh.”

Recommendations for a zoning overlay zone and a tree program were not acted upon even though they were the result of community input.

The best buffers for all types of wetlands are those that already exist with native vegetation, Snyder said.

“The challenge for local government is enforcement,” she said. Without that, the buffers, and the wetlands, suffer “death by a thousand cuts.”