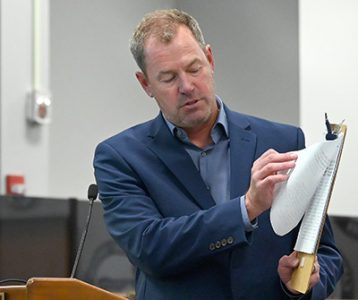 Mike Junga of Cabana Boy shows the board names of businesses opposed to the change.

A week-long survey by the Georgetown County School District showed overwhelming support among staff, parents and students for a plan that will start classes the first week of August next year and add two midterm breaks. The school board approved the plan this week with only one of the nine members opposed.

“Community. That’s the word that kept coming back to me,” Board Member Patti Hammel said before voting against the plan. “I want us to be a community. I want everybody to buy into what we’re doing.”

The recent survey, the second by the district, found more than two thirds of people who identified as community members opposed the change from the traditional calendar that would start classes in the fourth week of August. Business owners who rely on students and teachers to fill jobs during the summer tourist season say the change will leave them shorthanded.

“There’s about 500 kids from Georgetown County that are employed in the community of Pawleys Island in the hospitality sector alone,” Mike Junga, owner of the Cabana Boy beach service, told the board. “That’s taking quite a few kids out of the workforce that first two weeks of August.”

Junga obtained signatures from other businesses that oppose the change.

But the community members who participated in the survey totaled 186 of the 2,922 responses.

There were 500 responses from district staff. Nearly 70 percent favored the earlier start and additional week-long breaks in October and February. Those are in addition to the week’s break at Thanksgiving, the two-week break at Christmas and the week-long spring break.

The calendar, known as “modified year round,” was first proposed by Superintendent Keith Price last winter.

Two half-days during the breaks would provide students a chance to get extra help.

Amanda Hassell of Hagley told the board she was concerned that the breaks would disrupt learning for two of her three children who are in special-needs classes.

“For my children, this is a monumental and daily challenge,” she said.

Details about the extra help were also lacking, Hassell said.

Board members said they understood the needs of the tourism businesses, but said they don’t believe the impact will be as great as business owners expect.

“At the end of the school year, we’re going to get out earlier. That would help them,” Board Member Mike Cafaro said. “This is a change, but it’s not a drastic change.”

Board Member Lynne Ford said the support from those in the schools was significant.

“We’re in the business of educating children. That has to be our first priority,” she said.

Most other districts in the Pee Dee region have similar calendars or will start them next year, Price said. “What I hear from them is there’s an almost instant morale boost,” he said.

The quarterly breaks are intended to reduce student and teacher burnout.

He hopes the district will be able to partner with businesses on work-based learning programs. Culinary arts is one that would help the tourism sector, Price said.