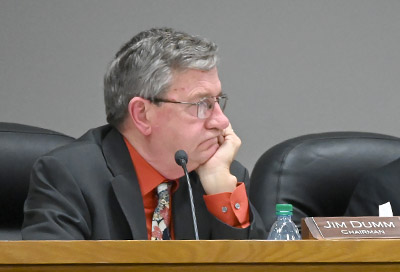 The Georgetown County School Board will have one new member in the spring, and maybe two.

Chairman Jim Dumm sent a letter to Superintendent Keith Price dated Dec. 23 tendering his resignation effective at midnight on Dec. 31. Dumm, who had served on the board for 27 years, cited personal and family health considerations.

The school district announced the resignation on Monday.

A special election will be held on March 29 to fill the remainder of Dumm’s term, which ends in November.

Aphra McCrea, Georgetown County’s elections director, said Tuesday that since Dumm’s is an at-large seat, all 34 precincts in the county will be open. She does not expect a large turnout, she added.

Board Member Pat DeLeone has known Dumm for almost 40 years. They are neighbors and their sons are the same age. She said both Dumm and his wife, Barbara, have had health issues.

“I know that he’s doing what is best for his family although I will be really sad to see him leave but I understand,” DeLeone said. “He’s been supportive of me the whole time I’ve been on the board.”

Twenty-seven years on the board is a long time to give up your life for your community, DeLeone added.

“When you stop and think about all the meetings he’s attended and all the workshops he’s attended, and all the graduations,” DeLeone said. “He loves being there when the kids graduate and when they’re successful.

Board Member Mike Cafaro said he was sorry to see Dumm leave.

“Jim’s been a very dedicated person to the School District. He’s put his heart and soul into it,” Cafaro added. “He was a dedicated leader to the school district.”

Dumm worked at Tara Hall Home for Boys for 50 years before retiring in November 2020.

Last September, a Georgetown County Sheriff’s Office report was made public that revealed that Dumm had met with the FBI and a sheriff’s investigator in September 2020 about “possible fraud or embezzlement” at Tara Hall.

In a public statement before the next school board meeting, Dumm said he and the nonprofit were victims of the fraud.

“In July 2020, my computer at Tara Hall was hacked. Unknowingly, at the same time, both myself and Tara Hall became the victims of a highly sophisticated financial scam,” Dumm said. “Once I realized the directives I had been receiving were fraudulent, I informed my board of trustees. I fully cooperated with subsequent investigations. There are no allegations of embezzlement whatsoever and I did not intentionally violate any laws.”

Dumm told the Coastal Observer that far from embezzlement, “I lost personal money.” He also said he couldn’t talk about the details, but added, “I did some stupid things.”

Dumm’s seat might not be the only one becoming vacant.

DeLeone may be required to step down if County Council approves a redistricting map that removes her home in the Kensington neighborhood of Georgetown from District 2.

If that happens, DeLeone told the school district she would resign in March.

If DeLeone chooses not to resign, it is unclear whether the she would be able to continue to serve.

McCrea said according to an opinion from the state attorney general, elected officials are not required to resign due to redistricting. That would ignore what the voters wanted, she added.

Lindsay Ann Thompson, attorney for the school district, disagrees. Thompson said under district policy, if a board member no longer resides in their district, the seat will be considered vacant immediately. As of Wednesday, Thompson was trying to figure out whether she or the attorney general was correct.

Even if her district doesn’t change, DeLeone said she will not run for re-election when her term expires in November.

Vice Chairman Arthur Lance Jr., who represents District 7, will serve as chairman. Lance has previously said he will not run for re-election when his term expires in November.

Thompson said the board might select a new vice chairman at its next meeting on Jan. 18.

Cafaro said he wants to be vice chairman and has already announced his intention to run for re-election in November.