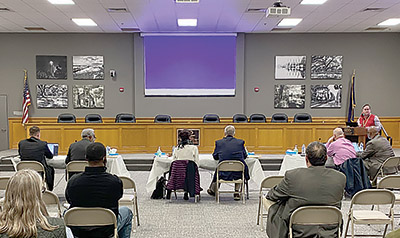 The school board faces nine empty seats from tables set up on the board room floor.

The 2022-23 school year is expected to start at its usual time in mid-August under a new calendar made public at the Georgetown County School Board meeting this week, not earlier in August as the district proposed in January.

Under the “traditional” calendar, teachers would return to work Aug. 8 and the first day of classes for students would be Aug. 15. The school year would end the week of Memorial Day, May 29.

“We wanted to go ahead and get next year’s calendar approved, so that’s why we came back with a different presentation,” Superintendent Keith Price told the school board on Tuesday.

“One of the things was, going to a significant change with less than six months notice was going to present a challenge for a lot of people,” Price said. “I certainly understand that.”

The district received positive and negative feedback on the proposed calendars, Price said, which made him rethink the timeline for their implementation. He told the board the idea for the “modified year round”calendar has not been abandoned.

“Based on a lot of the feedback, we’ve got some educating that we need to do about what it is and what it is not and some research that we need to do,” Price said. “We’re going to try to come back again to make this proposal in the future, to take the time to make some presentations, have some Q&A sessions, collect that feedback, possibly do some surveys with students, parents, employees, community members to try to take a gauge on whether or not that modified calendar is something we want to consider for our county, or if largely it’s not for us.”

One facet of the “bridge” and “modified year round” calendars that would remain in place for 2022-23 would be schools being closed for an entire week for Thanksgiving, instead of the usual three days. Veterans Day would also be a half-day for staff and students instead of the traditional full day off.

Chelice Waites, the district’s director of human resources, told the board the half-day would allow staff and students to participate in Veterans Day activities if they want to.

The School Board took no action on the calendar. It will have to vote to approve it before it becomes official.

The board is also considering changing its policy regarding school calendars, which states that staff must present a proposed three-year calendar to the board for approval in January and the board must approve them before they are given to employees for consideration.

“How the policy is written is not exactly in line with how we’ve been practicing,” Price said.

People who are serving or have served on the district’s calendar committee told Price the three-year calendars have always been “tweeked” in the past after they were approved.

The board voted to suspend that policy last month when it didn’t vote on the “bridge” and “modified year round” calendars.

Under the proposed changes, no reference is made to a three-year calendar or bringing calendars to the board in January.

There is also a reference to starting schools before the third Monday in August if the district is operating on a “year-round modified” calendar.

“You notice the way this is written it doesn’t say that we have to offer a modified calendar, but it allows for it,” Price said.

The board will vote on the proposed changes to the calendar policy at a future meeting.