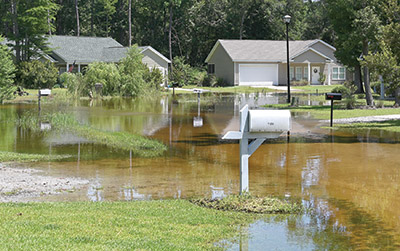 Bent Tree Lane is one of the areas already included in the list of county drainage projects.

The launch of an effort to get the public’s help to identify drainage problems on the Waccamaw Neck left residents frustrated that issues they want Georgetown County to fix have yet to be addressed.

“It turned into a gripe session,” said Bob Anderson. “That’s why I got mad and left. I was frustrated.”

He serves on County Council.

Others had already left the session last week at the Waccamaw Library, including one man who didn’t stay to learn about the app engineers want the public to use to provide data.

“This has been going on for years,” he said.

The input is part of a $702,000 stormwater master plan that the county is creating for the four watersheds on Waccamaw Neck. Engineers from the county and the firm that is producing the study, Thomas & Hutton, met with about 30 residents to explain how they could provide details about specific flooding events, damaged drains and blocked pipes that would help focus the attention of the study, which is due to be completed by the end of the year.

Part of the study will be a list of recommended drainage improvements and cost estimates.

But that doesn’t mean that the county has stopped working on projects that were scheduled before the County Council agreed to create the master plan last fall. Art Baker, the county capital projects manager, said he has more than 40 projects in various stages of development.

Those include a $1.2 million project to improve the drainage at Bent Tree, a 16-lot subdivision at the corner of Martin Luther King and Parkersville roads.  Residents have seen the water lap at their front doors and damage vehicles.

Stephanie Bari, who has lived on Bent Tree Lane since 2019, said she was surprised more of her neighbors didn’t attend the meeting. She went to make sure their drainage project stayed on the county’s list.

Caroline Williamson, who lives on Beaumont Drive, said she had been trying for years to get the county to address flooding that comes through her property from Hagley.

“Art came out and looked at it – five years ago,” she said. “My land is eroding.”

A $750,000 stormwater project for the portion of Hagley that drains toward Beaumont is also on the county’s project list.

While people don’t have to use the app to ensure that an existing project stays on the list, she said that data about ongoing problems will help.

“It’s good to have people’s perspective because we’re going to be building a model,” Jones said. “We’re going to come back and show them. When you push the button, you’ll see the way the water runs.”

As of this week, a couple of dozen problems had been pinpointed on the app. The largest number were in the Hagley area.

“I’ve had calls from people in Hagley,” Anderson said. The neighborhood is part of his council district.

He told people at last week’s meeting that they should contact their council member with specific concerns about drainage projects. He wanted to keep the focus on the master plan and the need to collect data.

“I was not a happy camper with that meeting,” he said. “I don’t think we did a good job of getting the word out.”

The master plan will identify the root cause of flooding problems and allow the county to develop mitigation projects, Anderson said. He hopes that those can be funded through a 1-cent capital projects sales tax.

The county will continue to get the word out about the app, including contacting homeowners groups, Jones said. It is scheduled to be active through August. The county staff and the consultants will look at the data collected at that point to decide if more is needed.

Sam Hodge, who lives in Murrells Inlet, said he sees both sides of the issue. He was the county’s emergency management director.

“I understand your frustration,” he told the audience last week. But the master plan is a way for the county to address larger problems with flooding rather than a “Band-Aid solution,” he added. “It takes time. I feel for you. I flood, too.”

To report drainage issues for the watershed study, go to georgetowncountypublicprojects.geothinq.com.