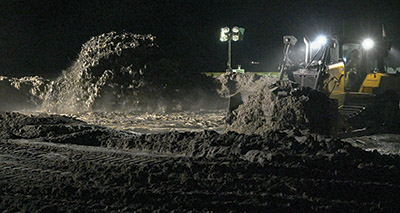 A bulldozer pushes up a berm to collect the sand that is pumped to the beach by a dredge offshore.

Weather and mechanical problems led to delays in a beach renourishment project at Litchfield Beach that had already received permission from regulators to work during the sea turtle nesting season.

The extension of the permit for work at the Peninsula on the southern end of Litchfield has added to concern that state and federal agencies are backtracking on decades of protections for the endangered and threatened reptiles.

“It feels like a big step backward,” said Amy Armstrong, executive director and chief counsel of the S.C. Environmental Law Project. “To allow exceptions like this, it’s harmful and troubling.”

The Peninsula Property Owners Association received federal and state permits in 2020 to place up to 400,000 cubic yards of sand on about half a mile of beach in front of the gated community. The work was scheduled to start last winter. The contractor, Marinex Construction, was hired to do projects at DeBordieu and Litchfield.

The start of both local projects was delayed because of a project in Florida that was stalled by permitting issues last summer.

The Litchfield project was supposed to be completed by April 30 before the start of sea turtle nesting season. The state Department of Health and Environmental Control and the Army Corps of Engineers agreed to extend the permit to June 30, but required additional monitoring of the creatures that live in the beach sand and monitoring of sea turtles.

The DeBordieu renourishment was completed in mid-May. The dredge then moved to a borrow site about 3.5 miles offshore of North Litchfield.

Because of weather delays and equipment problems, the project received a second extension.

There are 33 houses in the Peninsula. A pair of bulldozers was pushing up sand in front of the last six houses this week. The dredge didn’t operate over the Fourth of July.

S.C. United Turtle Enthusiasts provided monitors on the nights the dredge was running. One sea turtle nested next to the dredge pipe. Another nested near the southernmost house. Both nests were moved.

Armstrong is waiting to see data from the monitors that are required to be stationed on the dredge itself. Studies by the Corps have shown that the dredging does impact sea turtles.

“They know that sea turtles are going to die,” she said. “The whole reason they have the limits is because they don’t want to interfere with sea turtle nesting or hatching.”

There will be no night work at Litchfield after Friday, Traynum said, because nests are beginning to hatch.

Once the sand pumping is done, the crews will till the newly-created berm. Sand fencing is being installed on a dune that was created in front of the houses. Beach grass is also being planted.

“Nobody wants to build them in the summer because there’s issues with tourists and turtles,” he said.

But Armstrong said the Litchfield project isn’t unique. “I think it is becoming part of the routine,” she said.

Groups like SCUTE, which began almost 40 years ago, have helped get restrictions on outdoor lights that distrupt the hatchlings and the state and required commercial fishers to use devices to prevent netting turtles, she noted. There is wide public support for protecting the sea turtles.

“From our perspective, there should be a hard line cutoff,” she said. “It keeps moving. Soon, we’re going to have the ability to dredge and renourish throughout the year. When do we close the door?”