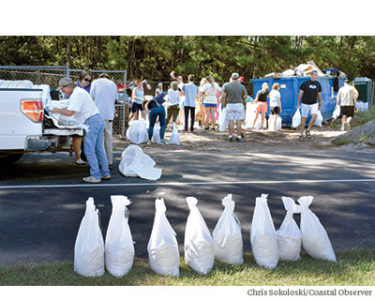 Residents arrived as early as 8:30 for the 10 a.m. sandbag distribution at Waccamaw Middle School on Tuesday.

Jim Willis arrived at Waccamaw Middle School at 8:30 a.m. on Tuesday to pick up sandbags to protect his Litchfield home if Hurricane Dorian brought flooding.

More than two hours later Willis finally had 10 bags in the back of his pickup truck.

The tourist season gave way to the “nervous season” this week as Hurricane Dorian sat spinning over the Bahamas poised to storm up the East Coast.

Gov. Henry McMaster issued an evacuation order for the coastal “A zones” that went into effect Monday as the forward speed for Dorian dropped to zero. The town of Pawleys Island extended its evacuation deadline to Wednesday at noon. Officials then agreed that property owners and their contractors could stay until 5 p.m.

“What we want is to prevent the sightseers,” Police Chief Mike Fanning said.

Dorian is the fifth hurricane to threaten the area in five years.

“We’re becoming quite experienced,” said Ray Gagnon, executive director of the Georgetown County Water and Sewer District. “It still gets me a little anxious every time.”

The fall used to be known as the “secret season” when the weather was good and crowds were thin. Pawleys Island Mayor Jimmy Braswell now calls it the “nervous season,” adding “we really need some relief.

At the middle school Willis was dismayed at how frantic the the process was for getting sandbags. There wasn’t enough room for people to work.

Some emergency management officials have said people regard sandbags as they once did plywood, an essential part of preparation.

The county’s distribution of the sandbags was a little chaotic. The sand was at the school in time for the 10 a.m. start, but the bags didn’t arrive until 10:30 a.m. The truck that carried the bags ended up in the visitors parking lot on the left side of the campus. The sand was in a fenced area on the right side.

Like a pied piper, the truck full of bags made its way to other side of the school, followed closely by more than a dozen cars, lead by Willis. The procession was met by more cars that were just arriving.

As traffic backed up onto Wildcat Way in both directions, many impatient drivers cut through grassy areas or drove the wrong way on the school’s one-way driveway to get closer to where the distribution was taking place.

During Hurricane Florence last year, the county distributed full sandbags. People drove up in their cars and volunteers loaded the bags for them.

This year, the county provided the sand, the bags and a handful of volunteers to help out. But most people were on their own.

Elizabeth Bradford lives in Pawleys Plantation. Water is always her biggest concern when a storm is near because her house is on Pawleys Creek.

“We had storm surge for [Hurricane] Matthew and they said it’s going to be the same as Matthew and I know I’m going to have water,” Bradford said.

If the storm gets bad, Bradford said she would consider leaving her house, but doubted that she would leave the area.

Ray Jansson lives at the low point on the South Causeway. He didn’t use sandbags when Matthew and Florence hit and watched as the water came all the way to his porch.

After waiting more than 90 minutes and watching other people drive past a line of cars, Jansson got frustrated and left.

“It’s been a fiasco,” Jansson said. “Everybody’s getting carried away and ignoring everybody else.”

“You have five days to prepare and then you worry,” Gagnon said. While Dorian was expected to diminish from the Category 5 status as it moved north, he said the utility is preparing for “a Bahama impact.”

“The thing about hurricanes is you never know what they’re going to do,” he said.

But they do pass. Pawleys Island was already discussing how soon evacuees will be able to return.