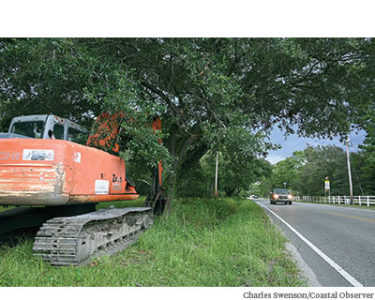 A trackhoe waited under the oaks along Waverly Road in July.

Heavy equipment parked under a row of oak trees along Waverly Road sent county officials scrambling this week to prevent the trees from being cut to install a sewer line for a new development.

“They’re getting ready to dig up eight large live oak trees,” D. Russell told Georgetown County Council. The trees run across the front of his property on Waverly Road, where survey stakes mark the edge of the state road right-of-way.

A crew showed up around 4 p.m. Tuesday with a trackhoe and Russell said they told him they would be back at 7 the next morning to start work.

But all was quiet Wednesday at the site. Not so in the office of DNS Sitework, where the owner, David Quandt, said he was responding to emails about the project.

The trackhoe is parked under the first of the oaks to “test the waters,” he said.

The Porches at Waverly is a 13-lot subdivision approved by the county in 2016. To provide sewer, the developers, Chase and Browder McGill, have to connect to a Georgetown County Water and Sewer District lift station about 400 feet west on Waverly Road. Although their initial plan called for digging a 9-foot-deep trench, the brothers opted to bore underground to avoid the trees.

“It will not be perfect, but it will work,” Quandt said he told the utility at the time. “It does have some bellies in it.”

Ray Gagnon, the utility’s executive director, called the path of the 10-inch pipe “a rollercoaster.”

He said the engineer of record for the project wouldn’t sign off on it. The district hasn’t recieved notice that a new engineer has a plan for repairing or replacing the line.

Quandt said the water disrtict has accepted similar lines in the past and that the utility in Horry County accepts them routinely. “Engineers have said it would work,” he said.

“We spend a million dollars a year replacing bad pipe,” Gagnon said. “Why would we accept any more?”

The uneven pipe will allow solids to collect. That will eventually block the pipe and cause sewage to back up into the homes, Gagnon said.

“They were doing the right thing, trying to save the trees,” he said. “At a higher cost, I might add.”

The sewer line has cost twice what it normally would, Quandt said. That cost will only go up if the line has to be replaced.

“The only way to resolve it is to tear those oak trees down and dig up the whole thing,” he said. “Everybody wants to save these trees.”

“We have brainstormed it because we don’t want those trees to go away either,” Gagnon said. “We couldn’t come up with anything.”

Quandt said he is still working on a resolution, but the trackhoe is a reminder of what may happen.

Boyd Johnson, the county planning director, said the oaks are in the road right-of-way and not protected by the county tree ordinance.

The state Department of Transporation would have to grant an encroachment  permit for the work, he added.