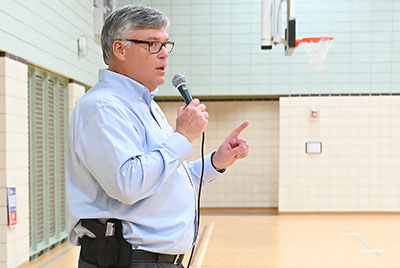 Sheriff Carter Weaver will take this week’s election result to Georgetown County Council in an effort to fund additional deputies, particularly on the Waccamaw Neck.

“A vote for me on Tuesday is going to be a vote for me standing in front of our County Council asking for people,” Weaver told a GOP voter rally last week.

Weaver, a Murrells Inlet Republican, won re-election this week with 64.4 percent of the vote over the Democratic challenger Birt Adams, a retired New York corrections officer who lives in Plantersville. Weaver, the assistant sheriff for 18 years, was named sheriff in September 2019 following the death of Lane Cribb, the county’s longest-serving sheriff. Weaver won a special GOP primary in December and beat Adams, who was a write-in candidate, in a special election in February.

“We need police,” Weaver told the GOP rally, putting the emphasis on the first syllable. “Especially on the Waccamaw Neck.”

While the county’s estimated population is about 63,000, Weaver said that doesn’t account for tourism.

“You can look at any numbers you want to, but this Waccamaw Neck is probably hosting over 200,000 people every day. And we have not had an increase in law enforcement officers in the 20 years that I’ve been here.”

Along with adding deputies, Weaver said he wants to increase deputy pay. The county raised pay in recent years to help retain emergency services workers. The sheriff’s office has seen the benefit.

“I’ve got people that you know who they are. It’s not a revolving door,” Weaver said. “They learn their Chick-fil-A attitude: ‘Hey, how are you today? How may I help you?’ Because that’s what it’s about.”

Weaver has also lobbied the County Council for a new jail. The current facility, which opened in 1993, hasn’t aged well and is seen as a hazard to inmates and staff. The cost of a new facility is listed in the capital improvement plan at $36 million.

“I run one of the biggest mental health institutions in the county, and that’s our detention center,” Weaver said. “That’s got to stop. It’s not doing these families any good. It’s not helping with the cure and it’s not helping the problem.”

The solution is “help from our state partners” to improve mental health services, Weaver said.

“A vote for me Tuesday is a vote for those things,” he told the Republican rally. “It’s going to cost money, but it’s time. Are we going to build more parks or are we going to hire police?”