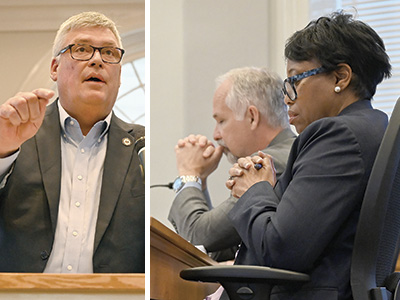 In making his case for a 10 percent pay raise to keep his staff from being hired away by neighboring agencies, Sheriff Carter Weaver said this week that needs to include fire and rescue workers as well.

As an elected official, he said, he can raise concerns in a way that unelected emergency services staff cannot.

“Public safety. I’m talking about law enforcement, fire and EMS,” Weaver said. “There is no plan in place to address these things.”

He has also asked for an increase of eight patrol deputies for the coming year and a total of 26 new deputies through 2030.

The first eight deputies were included in the budget request he prepared for County Council, but not the 10 percent pay increase, Weaver said. The budget showed a deficit, which he wants the council to make up through additional revenue.

“It wasn’t balanced until they reported to council that it was balanced,” Weaver said, referring to a budget workshop last week where he interrupted a presentation by the finance director, Karis Langston, to press for additional funding.

“My job is to present a balanced budget,” Christian said. “I was asked by council to took at a variety of options; that’s what we’re preparing.”

The cost of eight patrol deputies would be another $1.1 million, according to Weaver.

The sheriff first raised the issue of adding more deputies last year. His office has not received property tax revenue to hire more patrol deputies since 2005. Since then, the county’s population has increased, driven by growth on the Waccamaw Neck. The number of calls for service has also grown. And Weaver points out that the population growth doesn’t take into account the number of tourists.

After the initial increase of eight deputies, he proposes adding three deputies each year between 2024 and 2030.

“I’m not here for my own self-preservation,” Weaver said. “I’m here to get it fixed for the next generation of sheriffs and deputy sheriffs.”

The sheriff’s office is funded through a dedicated tax rate, or millage. In the current budget, just under 25 percent of the property tax collections in the Midway Fire District go to the law enforcement fund. (The county has two fire tax districts: Midway and a rural district.  Murrells Inlet-Garden City is a state special-purpose district for fire.)

State law limits the amount that local government can raise property taxes each year to the combination of the federal Consumer Price Index and population growth.

The county has hit that limit, 5.46 percent, for the law enforcement fund, Christian said. To increase funding for the sheriff’s office would require shifting property taxes from the general fund.

“All of this comes back to Act 388,” she said, referring to the state law that caps property taxes along with the rise in property values through the five-year reassessment cycle. “At the time, people thought that was a great idea. Long term, it’s created some issues.”

For Georgetown County, those are acute because while the Waccamaw Neck is growing, the rest of the county is not. The growth factor in this year’s property tax formula is .76 percent. In Horry County, it’s 3.42 percent.

Coupled with low unemployment, the imbalance between the two counties has led to a crisis in employee retention for the sheriff’s office, Weaver said. That prompted his call for a 10 percent pay raise.

“My request was 10 percent, but in reality I’m looking for a way to compete,” Weaver said. “How do you add more housing and not more deputies?”

A council member, who he declined to name, suggested that Weaver shift deputies from the western part of the county, known to deputies as the “town side,” to the Waccamaw Neck, which they call “the beach side.”

His response was “absolutely not. First of all, it’s not fair to the citizens. Second of all, and just as important, is the safety of the deputies.” Weaver said there needs to be sufficient staff for patrol deputies to back up one another.

That word is also on Christian’s mind as she tries to balance competing demands for limited revenue.

“I understand the sheriff advocating for his folks. I have the unique responsibility of advocating for everybody,” Christian said. “It takes a lot of folks to provide services.”

Whatever the county does in the next fiscal year has to be sustainable over future budget cycles, she said.

Christian has included funds in the budget for pay raises for all county employees. The county can also use funds from the federal American Rescue Plan Act to provide one-time bonuses.

“That’s one of the things we’re looking at,” Christian said.

Weaver said he and Christian talked about creating an employee retention plan, something that hasn’t been discussed before.

“There is still no plan in place to address the need for patrol deputies within the ranks of the sheriff’s office,” he said.

Council Member Bob Anderson was one of three council members who met with Weaver last year about additional deputies.

“It got plenty of attention,” he said. The problem was “he’s maxed out on his millage. The only other money would be coming from somebody else’s pocket.”

Anderson’s solution is long-term: increase growth in other parts of the county.

With growth, Weaver said, the demand for public safety will also increase.