Simulation leads to call for task force on flooding 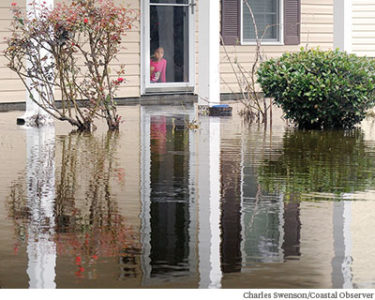 Heavy rains in July 2018 led to flooding. More extreme storms are projected for the future.

The citizens of Riverway County have spoken. They are concerned about increased flooding from a changing climate and are looking to local government to help prepare.

“We see a unified vision,” Maeve Snyder said. She is the coastal training coordinator at the National Estuarine Research Reserve based at USC’s Baruch Institute on Hobcaw Barony and a leader of Georgetown RISE.

Riverway County was the community created through a $100,000 federal grant that let citizens of Georgetown County debate sustainable development goals through a series of simulations starting last August. About 300 people were involved. Working in groups of six, each was assigned the role of a leader from different segments of a diverse community and asked to reach consensus about the best way to mitigate the impact of increased flooding.

Along with allowing participants to see the issue from different perspectives, the simulation led to a series of recommendation for tackling the problem in the real world.

Georgetown RISE – an acronym for resilience, innovation, sustainability and education – is a partnership between the research reserve, Coastal Carolina University and local government. In addition to the climate change project, it sponsors an internship program for Coastal students, created a solar energy initiative for nonprofits and helped organize a series of forums on growth along the Waccamaw Neck.

To deal with increased coastal flooding, Georgetown RISE recommends that Georgetown County create community task forces that will continue to focus on the issue the way participants did for the fictional Riverway County. The goal is to create “a shared vision for climate risk management, sustainability and resilience,” said Pam Martin, the program’s executive director and a professor at Coastal Carolina. She told County Council last week “we’re giving you the validation to your representative districts.”

The simulation used global climate data that was “downscaled” by scientists at the University of South Carolina to project conditions in Georgetown County. While there may be a small increase in average temperatures, there will be greater variations in the extremes, Snyder said. The same is true of precipitation, with more major storm events projected.

“This is, in fact, real projection data for Georgetown County,” Snyder said.

The proposed task forces will balance the economic, environmental and social aspects of solutions and can create a “resilience plan” as part of the county’s state-mandated comprehensive plan, Martin said.

The recommendation came as the council adopted a budget that was balanced in part by one-time federal reimbursements for a series of storms over the last four years.

“Sunny-day flooding  is impacting the budget in a different way because it’s not a named storm” and not eligible for disaster funds, Martin told the council.

While the state created a floodwater commission in the wake of Hurricane Florence last year, the survey of participants in the Georgetown simulations showed that they believe local government responsible for preparing for climate impacts, rather than state or federal government.

Georgetown County is at work on a 10-year update to its comprehensive plan. It covers a range of topics, including population, housing, natural resources, economic development, facilities, transportation and culture. Its most visible component is land use, which provides the basis for the county zoning ordinance and development regulations.

Adapting to climate change would fall within several of the comprehensive plan’s elements and the state law doesn’t acknowledge the overlap, Martin said. She suggested the county could include the work of community task forces as an addendum

Martin also pointed out that the simulation was modeled on a project in New England. In that region, there were 200 people involved. Georgetown County had 300.

“What we heard time and again was, ‘we want to be partners with local government,’” Martin said.