Size of wetlands buffer left for debate as plan advances 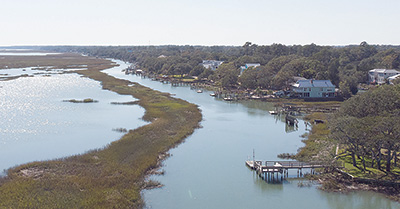 Early drafts called for a minimum buffer of 50 feet between development and wetlands.

A plan for protecting Georgetown County’s natural resources no longer calls for a minimum 50-foot buffer between wetlands and development.

“We’ve had input from both sides,” said Matt Millwood, the senior planner who compiled six drafts of the plan this year. “We don’t want to put a number in that.”

Instead, a minimum buffer will be defined when the planning staff starts work on a wetlands ordinance, one of the measures called for in the update to the natural resources element of the county’s comprehensive plan.

State law mandates that local governments adopt a comprehensive plan with 10 elements that cover topics such as natural resources, housing, land use and transportation. The land-use element gets the most attention because it establishes the legal basis for the zoning ordinance.

Last year, the county put a revision to the land-use element on hold as it sought a way to get more public input. A survey conducted as part of that process found 96 percent of respondents rated natural resources as the county’s most important feature and over 80 percent favor stronger protection through the zoning regulations.

The Planning Commission held a public hearing on the natural resources plan last month, but deferred a vote in order to get more input from the rural areas of the county. The planning staff sent information about the plan to 10 people it identified as stakeholders and to churches. It held a workshop in the Choppee community.

“It’s a great plan,” said Marvin Neal, a Plantersville resident and a former commission member. He said it was important to get the additional input from the rural communities because “there’s a lot of encroachment on our natural resources.”

The month’s delay also provided time for Millwood to add language requested by the S.C. Environmental Law Project that encourages the county to limit the use of septic tanks to treat wastewater.

Earlier this month, the law project filed an action in Charleston County asking the courts to find that the state Department of Health and Environmental Control is required to review septic tank permits for consistency with the Coastal Zone Management Act and provide public notice of permit requests.

The issue arose due to the use of septic tanks in high-density developments near coastal waters.

“Septic systems are not inherently problematic when sited correctly, but we are increasingly seeing developers cluster septic systems by the dozens and even hundreds within sensitive coastal areas,” Emily Nellermore, staff attorney with SCELP, said when the action was filed.

Last week, she called the commission vote on the natural resources plan “a crucial step.”

But she added, “the county of Georgetown really needs to seek out and find more resources to see that the strategies are implemented.”

The plan notes that one of the threats to natural resources is the lack of staff and funds to enforce its regulations.

Among the goals in the plan are reducing human impact on the environment by restricting single-use plastics, seeking grants to help buy sensitive habitats, creating a marshfront management plan and preserving forest lands through stricter standards for rezoning.

Along with creating a wetlands ordinance, the plan calls for continued strengthening of the exisiting tree ordinance.

Commission member Sandra Bundy questioned language that includes “height allowance” in the list of incentives that could be used to promote wetland protections.

“We’re going to end up looking like Myrtle Beach,” she said.

Holly Richardson, the planning director, said she understood the concern, but added, “we’re not necessarily talking about the Waccamaw Neck.”

Elizabeth Krauss, who chairs the commission, suggested adding text that confirms the county’s 35-foot height limit as the standard.

Millwood explained that the goal would be to allow taller buildings in order to preserve valuable resources.

Krauss said including the language in the comprehensive plan, could lead developers to think they could build higher.

After the vote, Hamby asked Nellermoe for her recommendation on a wetlands setback.

“There are a lot of things that need to be considered, including the type of use for the land,” Nellermoe said. “Even the scientific community is not clear if there’s one best number. I think there are many numbers.”

But she added, “50 feet is probably the minimum.”