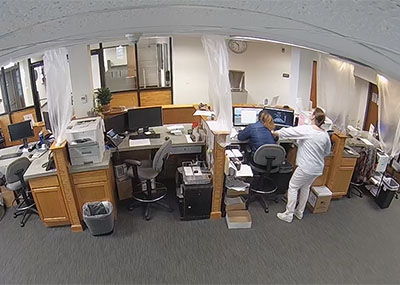 Security video shows Peteet, in white, slap an employee on the shoulder.

The State Law Enforcement Division is investigating a complaint that the Georgetown County treasurer, Allison Sippel Peteet, assaulted an employee.

The incident occurred Tuesday in the treasurer’s office, according to a security video reviewed by the Coastal Observer.

The request for an investigation came from the county administration, according to a statement issued by the county. The incident was reported to the county’s human resources department although, as an elected official, Peteet has authority over her staff.

The video shows a clerk walking to a work station at the front desk in the treasurer’s office in the courthouse around 10:30 a.m. She picks up the phone. Peteet comes up behind her and listens to the conversation.

Peteet then slaps the clerk on the back with her left hand. The clerk turns and puts the phone on hold.

Peteet talks to the clerk, who gestures toward her computer screen with an open hand.

The clerk then gets out of her chair and walks away. Peteet picks up the phone, works on the computer and hangs up.

Peteet then calls the clerk back to the desk. She puts out a hand, palm down, to calm the clerk, who had been wiping her eye. They talk and both go back to work, with the clerk taking a tissue from a nearby desk.

Peteet did not return a call Friday seeking comment.

She is completing her first term as treasurer. She faces a challenge in the June 9 Republican primary from Miriam Mace, who works in the county assessor’s office. There is no Democrat running for the office.