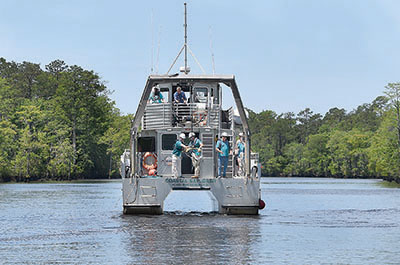 Researchers deploy a monitor in the Intracoastal Waterway.

New research being conducted by Coastal Carolina University may help figure out why Georgetown and Horry counties have been hit by 1,000-year floods several times in the last few years and help find ways to mitigate future flooding.

“There are very few things in the Pee Dee area that are as important,” state Sen. Stephen Goldfinch said. “It was important five years ago, but the cumulative consciousness around the issue of flooding has really just starting percolating to the top of everybody’s minds. When you have multiple 1,000-year flooding events in a short portion of history, it wakes everybody up.”

Representatives from CCU unveiled “Smart River Research” this week aboard one of the university’s research vessels at Osprey Marina in Socastee.

Last week, divers from the S.C. Guard positioned water quality sensors on the bottom of the Intracoastal Waterway to track salinity, temperature and dissolved oxygen levels.

The waterway connects with the Waccamaw River near Bucksport.

“This is a drinking water source. It goes down to Grand Strand Water and Sewer,” Paul Gayes, director of CCU’s Center for Marine and Wetland Studies said. “Potable water is a serious issue.”

Guard divers helped with the project as a training exercise.

CCU researchers also dropped a side-scanning sonar unit into the water to map the bottom of the waterway and determine what kind of materials are there, like sand or mud.

Gayes said the makeup of the bottom of a riverbed, along with the amount of debris, affects how water flows.

“If there’s all kinds of roughness, the water slows down,” Gayes said. “It doesn’t drain. It backs up and it floods.”

Researchers are also studying how land use changes affect flooding and what areas are likely to flood in the future.

“When we start linking that all together – the natural side, the economics, what’s at risk and what the risk really is – I think we can get better management,” Gayes said.

In 50 years, the factors that affect water dumping into Winyah Bay will have changed, Gayes added.

“We need to be getting ahead of the curve,” Gayes said. “That’s the mindset of what we’re doing.”

The research is a partnership between CCU, state and federal governments and government agencies, and private entities like Duke Energy and the National Science Foundation.

Goldfinch said these types of public/private partnerships are very important.

“There are things that government does well, and there are things the private sector does well, and when you combine the two I think you get the best of both worlds,” Goldfinch said. “This is a situation where the government truly cannot make an impact on this issue without the help of our upstream partners like Duke. So Duke and Coastal coming together with the state is the best of everything.”

“We’ve got a massive problem,” Anderson said. “We have got to have flood models in Georgetown County that our citizens can believe in, so when we say ‘pick up and leave,’ they know they’ve got to pick up and leave.”

Goldfinch has talked to residents whose homes have flooded 15 times in the last five years.

“It literally stops their lives every time,” Goldfinch said. “How can you live in such an environment? The answer is you can’t. It’s impossible.”