Spending Christmas in Florida starts with some planning – Coastal Observer

Spending Christmas in Florida starts with some planning 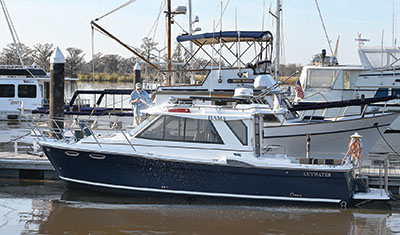 The Rama at the dock at Heritage Plantation Marina.

Rick and Marie Ahlert will spend Christmas in Florida; perhaps on the Gulf Coast, maybe in the Keys. They’re in no hurry to get there. Their plans are for Christmas 2021.

The Ahlerts will set out in March on a 6,000-mile journey around the eastern United States on a 28-foot boat. The route is known as the Great Loop. It should take about a year.

“We love being on the water,” Rick said. The Pawleys Island couple have operated a river tour business for the last three years.

They also have an adventurous streak. Marie retired after 22 years as the city clerk in Warwick, R.I. Rick retired from a career in sales.

After they retired, they traveled across the U.S., sleeping in a 6-by-9-foot camper.

That makes their Cutwater boat, classified as a “pocket cruiser,” seem more like the Queen Mary.

“People ask, what do you do about clothes,” Marie said. “It all goes in one bag.”

And if all goes as planned, a bathing suit ought to be enough for everyday wear, she added.

The planning started over a year ago. Rick did some research. “Hey, you want to do the Great Loop?” he asked.

Marie did some research. “When do we leave?” she asked.

The first step was to find the right boat. The river tours were on a pontoon boat that they trailered to Hagley Landing.

They found the Cutwater in New Jersey. It has the classic lines of a workboat, but the amenities of a cruiser. It has a shallow draft of just over 2 feet, but a keel that provides stability.

The other key feature of the boat, named Rama for their initials, which has a frugal 260 hp diesel engine. At a cruising speed of just over 7 mph, it will burn 1.5 gallons of fuel every hour.

“I can live with that,” Rick said. They will travel five to six hours a day, averaging 40 miles.

The shakedown cruise from New Jersey to Heritage Plantation Marina was the Ahlert’s first long boat trip. They planned to cover 600 miles  in seven days. It took 12.

Rama ran into storms on the Chesapeake Bay that kept them in port.

“We found out very quickly that the boat could handle quite a bit,” Rick said.

They have both been around boats all their lives. Rick got a Coast Guard license for the river tours. But they found they still had plenty to learn and that there were people willing to teach them.

One couple they met on their first cruise was in their 80s. They had been living aboard their boat for 25 years.

“They took us under their wing,” Rick said. “That’s what this trip’s all about.”

The Great Loop will take them north again along the Intracoastal Waterway. After a side trip to Rhode Island, they will head up the Hudson River and across to the Great Lakes on the Erie Canal.

Although they will travel in their own coronavirus bubble, the pandemic may still affect the trip. They would like to cut across a portion of Ontario, but that is currently closed to U.S. boats.

They will be on the Great Lakes for the summer. They hope to reach Chicago by September. “It goes right through the middle of Chicago,” Rick said. “That’s going to be a pretty cool thing.”

From there they will travel the rivers – Illinois, Mississippi, Ohio, Tennessee and Tombigbee – to the Gulf of Mexico. Rama will enter the Gulf at Mobile, Ala., and cruise along the Florida Panhandle then down the west coast to Marathon, Fla.

The route returns to the Intracoastal Waterway for the last 800 miles.

Florida seemed a long way away as the Ahlerts polished the hull and painted the Rama’s bottom on a brisk weekend at Hazzard Marine in Georgetown. But like most work on a boat, the preparation is the key to a good result, they said.

“We, as Americans, live such a hectic life,” Rick said. “This is a chance to see more of our country and see it from the water.”

On the water  he Ahlerts will post updates on their trip at rickandmarie.com.