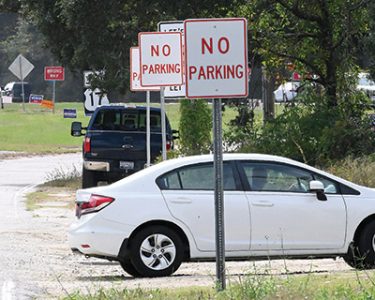 DOT put up signs in 2020 to stop people from parking perpendicular to Business 17.

A “no parking” zone along the Bike the Neck route in Murrells Inlet will be replaced with 13 parking spaces using funds included in this year’s state budget.

The parking area on the west side of Business 17 across from a wooden bridge over the marsh was a popular spot for people who wanted to park and bike or walk the path through Huntington Beach State Park. The state Department of Transportation put up “no parking” signs in October 2020 saying that people were parking at right-angles to the highway, which isn’t allowed in state traffic regulations because it requires them to back out into traffic.

“I don’t know why they think this parking isn’t as important as beach parking,” said state Rep. Lee Hewitt. He got $325,000 included in the budget for the state Department of Parks, Recreation and Tourism for Georgetown County to create the parallel-parking spaces.

The funds were an earmark in the  budget. They survived a veto from Gov. Henry McMaster, whose staff called Hewitt to get justification for the expenditure.

“That was parking for people to enjoy this wonderful bike path we’ve been building,” Hewitt said. “They determined it was an asset for residents and visitors.”

The plan for the parking spaces was created for the county by DDC Engineers last fall and approved by DOT. It creates an access lane separated from the southbound lane of Business 17 by a curb. The parking spaces will be made of pervious concrete. A crosswalk will connect the parking area to the northern end of the bridge.

It will take the county at least two months to get through the bidding process for the work, said Ray Funnye, the county director of Public Services.

The county’s engineers are still working with DOT on another bike path project.

A sidewalk that runs 1.3 miles along Waverly Road from Waccamaw Elementary School to Highway 17 is due to be replaced with an extension of the Bike the Neck path. The $1.85 million project was approved by County Council in March 2021 using a portion of the excess revenue collected with a capital projects sales tax that was in effect from 2015 to 2019.

The engineering firm Stantec designed the path, which will vary between 8 and 10 feet in width and follow the route of the sidewalk.

This month, DOT sent the county a list of 28 comments on various aspects of the work. Some asked for more details to be shown on the plans for the path and related drainage work.

One comment noted that the project is being called a “multi-use path.”  The current term for a path used by bicycles and pedestrians is “shared use path.”

“They can be notoriously detailed,” Council Member Steve Goggans said. “A lot of it is just checking the boxes.”

Each council member got $1 million from the sales tax surplus. Goggans allocated all of his to the project. Former Council Member Ron Charlton allocated the balance.

The work was supposed to be completed by the end of 2022.

The last Goggans heard, the county expected to put the project out to bid in July. He hopes that’s still the plan.

“I like to see a little bit of ground broken on bike paths before I leave office,” he said.

Goggans isn’t running for a third term. He will leave office in January.