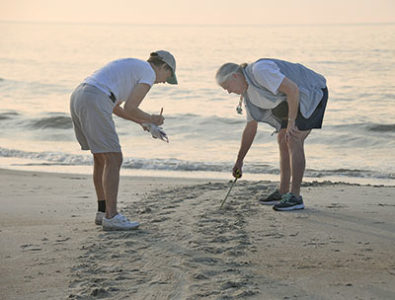 The seismic tests used to locate potential sources of offshore oil and gas “pose an undetermined but significant risk” to the state’s fisheries, according to the state Department of Health and Environmental Control, which this week denied certification of a permit to conduct the test.
The agency called for additional research and said that federal approvals for the tests “make critical generalizations and assumptions” about the effects of seismic testing.
The decision drew praise from opponents of a proposal by the Trump administration to open the Outer Continental Shelf to oil and gas drilling. It is “one more nail in the coffin of seismic testing and offshore drilling in the Atlantic,” said Jim Watkins, who chairs the leadership team of Stop Offshore Drilling in the Atlantic (SODA).
“You certainly hope the federal agencies are going to listen to the states,” state Rep. Lee Hewitt said. “If not, why ask them?”
The state was asked to certify that an application by WesternGeco for a federal permit to conduct seismic testing in the ocean from Maryland to Florida was consistent with the state’s Coastal Zone Management Program. The tests use airguns fired at 10-second intervals to assess the geology of the sea floor for possible oil and gas deposits. WesternGeco, a subsidiary of the oil service firm Schlumberger, wants to conduct the tests over 208 days.
“The proposed survey complies with the enforceable policies of South Carolina’s approved management program and will be conducted in a manner consistent with that program,” the company said in a letter to DHEC in March.
The agency received 1,720 comments to its public notice. All of them were opposed.
Chris Stout, manager of the coastal zone consistency section, noted that the agency gave conditional approval to seismic testing in 2015. But in this week’s decision he said new studies have raised concerns about the impact on marine life from the microscopic zooplankton at the bottom of the food chain to threatened and endangered species such as sea turtles and the Atlantic right whale.
A reduction in zooplankton “could potentially lead to cascading impacts within the base of the oceanic food chain, and ultimately on recreational and commercial fish populations,” Stout said in his decision. “Published scientific research on these topic areas is currently extremely limited, thus increasing the risk associated with seismic surveying.”
Approval of seismic testing by the National Marine Fisheries Service last year is being challenged in federal court by conservation groups and local governments, including the town of Pawleys Island. The federal agency said the tests would have no likely impact on several species and that the impacts on others would be mitigated.
Stout questioned the mitigation program for sea turtles, pointing out that it was intended for marine mammals. The state Department of Natural Resources “articulated uncertainty and concern with the appropriateness of transferring mitigation protocols designed for marine mammals to effectively mitigate impacts to sea turtles,” he wrote.
Additional information available since the federal approvals “raises compelling issues regarding the potential impact of seismic survey noise exposure on marine ecosystems,” Stout said.
Watkins said that portion of the state’s decision stood out. “The implication is that if we knew then what we know now, those permits – now in litigation – would not have been allowed,” he said.
“I was pleasantly surprised. There was a big question about what DHEC would do” because of the 2015 approval, said Amy Armstrong, executive director of the S.C. Environmental Law Project, which represents some of the plaintiffs in the federal suit. “I was glad to see that they relied on the opinions and expertise of DNR and the new studies.”
Hewitt, a former DHEC board member, sees the state’s denial of certification as a result of growing debate around the state about the impact of offshore drilling. “They gathered so much information because of questions we asked of them and testimony that we had,” he said.
Hewitt served on an ad hoc legislative committee on the issue and got DHEC to extend the public comment period for the seismic permit. “It’s been an ongoing process for them, gathering this information,” he said.
WesternGeco can appeal the state’s decision to the secretary of the Commerce Department. If the certification is issued over the state’s objection, Armstrong believes the plaintiffs in the current permit challenge would seek to intervene. “It’s always better to be defending a good decision than battling a bad decision,” she said.