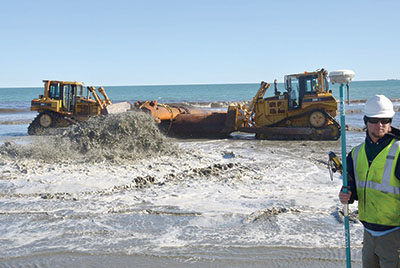 Offshore sand is spread on the beach at DeBordieu during a 2015 project.

A beach nourishment project at DeBordieu that includes construction of three rock and concrete groins was approved by the state Office of Ocean and Coastal Resource Management last week. Conservation groups and the Belle W. Baruch Foundation are considering challenges, as they did in 2011 when the state issued permits for a similar project.

The DeBordieu Colony Community Association wants to place up to 650,000 cubic yards of offshore sand on 1.5 miles of beach at the south end of the development. Two groins will extend 300 to 400 feet seaward of a bulkhead. The third will run 300 feet from the dune on the southern boundary with the Baruch property.

“The new groins are expected to trap and retain approximately 150,000-200,000 cubic yards of the 650,000 yards of placed sand and allow the remainder to pass over or around the structures and migrate down coast to the Baruch Foundation property,” Blanche Brown, the general manager of DeBordieu, said in a statement. “Initially, the excess nourishment sand will reduce the natural erosion rate along the Hobcaw Tract on the Baruch property.”

Groins are built perpendicular to the beach in order to trap sand that moves in the current parallel to the beach. Concern that groins at DeBordieu will impact the beach at Hobcaw and North Inlet led to the appeal of the permits in 2011. DeBordieu dropped that portion of the project and completed a beach nourishment project with 795,000 cubic yards of offshore sand in 2015.

“Factually, things haven’t really changed,” said Amy Armstrong, executive director of the S.C. Environmental Law Project, which represents the Coastal Conservation League. “Our expert has said for a long time, and I think scientific opinion is solidly behind it, that downdrift impacts are going to occur on a National Estuarine Research Reserve,” based at Hobcaw Barony.

Armstrong was still reviewing the permit. It contains 25 conditions that specify when and how the work can be done to minimize environmental impacts. They also require ongoing monitoring of the beach from DeBordieu to North Inlet. Any impact on adjacent beaches would require additional sand be placed, reconfiguration of the groins or removal of the groins.

“If there are impacts, being able to prove causation with the groins is difficult because of the erosion,” Armstrong said. “Once they’re in, they’re in.”

The Baruch Foundation trustees plan to meet to review the permit, said George Chastain, the foundation’s executive director. The foundation hired a coastal engineer to review the project. “We pointed out some technical issues where we felt like there were some adverse impacts,” Chastain said. He was also reviewing the permit this week.

Since 1990, DeBordieu has put 1.7 million cubic yards of sand on its beach in four projects. Because there is no access to the general public, the projects aren’t eligible for federal or state funds. In 2017, property owners approved a Beach Preservation Fund with an assessment to raise about $1.9 million a year over 17 years.

A 30-year study of beach management alternatives found that it would cost about $72 million to continue beach nourishment without the groins. With them, the cost would be about $30 million.

“Some critics of the project have recommended elimination of the groins but continuation of simply placing sand on the beach. This has been DeBordieu’s approach for 25 years, but it is not sustainable because of the way sand is drawn off by the rapidly eroding beach to the south of us,” Brown said.

A study of the long-term erosion rate of the beach from Pawleys Inlet to North Inlet shows the highest rate on the Baruch property just below DeBordieu. It was prepared for DeBordieu by Coastal Science and Engineering, which designed the project and which is working with the town of Pawleys Island on beach nourishment and groin repair projects.

Kana said he understands the concerns about the Baruch property. “At the same time, so much of the tax base is tied up in DeBordieu,” he said. “It has a ripple effect on the economy.”

Brown said DeBordieu accounts for about 10 percent of Georgetown County’s tax base.

“The other part of the safeguard for those who are exceedingly skeptical – and I don’t blame them, nobody has much experience with groins because we’re not allowed to build them that often – the groins can be removed,” Kana said.

The three groins were designed to allow sand to move over and around them, Kana said. Because the project will place more sand on the beach than the groins can hold, “there’s going to be a period of time when the erosion down coast is going to be less than it’s been historically,” he said. The beach will stabilize and “at some time it will be time to do a renourishment.”

While the goal of the groins is to expand the period between renourishment projects, Kana said that the search for sand for those projects will continue to move farther offshore.

“It’s tough in the Pawleys Island-DeBordieu area. It’s a patchwork of good sand interspersed with some very muddy material,” he said.

There are better deposits beyond the 3-mile limit, but he added, “we’d like to use sand that’s closer in so we can avoid federal waters. It’s a matter of economics.”