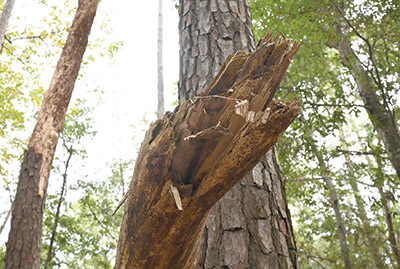 Dead trees and downed limbs at to the fuel load in the park’s forest.

In an open forest, flames from a fire could rise 5 feet. In a forest like the one that’s grown up on the south end of Huntington Beach State Park, the fire would reach into the tree canopy 50 feet above the ground.

“Flames will be coming out of the treetops,” said Drake Carroll, the prevention coordinator for the state Forestry Commission.

A regional wildfire risk assessment lists portions of the park as “very high.”

Brookgreen Gardens, which leases the park property to the state, plans to start work in January to thin the pine forest and create a firebreak between the park and North Litchfield.

“I’ve always thought I wouldn’t want to see this place burn up,” said Ernie Taylor, whose house in North Litchfield abuts the park. “I’m not alone in that respect.”

He was among a dozen area residents who got a briefing on the project from the Forestry Commission and staff of the Department of Parks, Recreation and Tourism. The forest has not been managed since it was damaged by Hurricane Hugo in 1989, said Terry Hurley, the chief of resource management for PRT.

There are now more trees than the land can support, said Rachel Snuggs, PRT’s coordinator of forestry programs. “They’re competing with each other.”

The understory trees and debris from fallen trees provide a source of fuel. Vines provide a pathway for the fire to reach into the trees, Snuggs said.

The  plan developed by  Brookgreen’s contractor – Dargan, King & Knight – will create an “open woodland,” she said.

Some trees will be removed and the understory will be cleared. The  8- to 10-foot-wide firebreak will be cleared down to bare dirt. It will weave around trees on the perimeter.

“You’re not pushing any trees over,” Carroll said.

A prescribed burn would be the best way to clear the understory, he said, but because of its location along Highway 17, “this is going to be a hard and tricky operation.”

Once the forest is thinned, the fuel load will be reassessed to determine the next step, Carroll said.

“Cleaning it up is going to be the best part, in my view,” Taylor said. “It’ll be inconvenient. I’ll have trucks in my back yard, but overall it will be worth it.”

The logging operation will close the Bike the Neck path that runs along Highway 17 inside the park boundary. Log trucks will need to cross the path somewhere near the old park entrance opposite the entrance to Brookgreen.

Although the partners in the project discussed ways to limit the impact on the path, the logger wanted it closed, Hurley said.

“They want to have it as safe as possible,” she said.

Tom Ross, one of four North Litchfield residents who biked to the meeting at the state park, suggested that the path stay open but cyclists be required to walk through the intersection with the logging road.

“That has enormous impact on the quality of life for a lot of us,” he said.

The path would only close when the log trucks are operating, Carroll said. The entire thinning should be done in a couple of weeks if the weather is dry, he added.

“They’re going to get in and out as fast as humanly possible,” Snuggs said.

The work will also provide an opportunity to teach the public about ways to reduce wildfire risk, particularly where homes abut forests, Carroll said.

There is a a story map with more information about the project here.