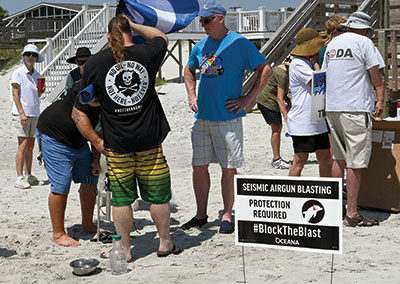 Participants at last month’s Hands Across the Sand rally at North Litchfield sign up to oppose seismic tests.

A month before a restriction on funding for state review of offshore oil and gas projects takes effect, the Department of Health and Environmental Control is preparing a response to a permit that will allow seismic testing.

WesternGeco applied in 2014 for a federal permit to conduct geological and geophysical surveys off the Atlantic Coast. The permit was denied when the Obama administration removed the Outer Continental Shelf from a five-year oil and gas leasing program.

The permits were revived when the Trump administration reopened the review of the leasing program in 2017.

Seismic surveys use an array of airguns towed behind a ship and fired at 10 second intervals for months at a time to determine if undersea geological formations are likely to contain oil or gas.

The federal Bureau of Ocean Energy Management has asked DHEC to certify that WesternGeco’s plan is consistent with the state’s Coastal Zone Management  Program. The state is required by federal law to adopt the program.

The company, a subsidiary of the international oil services firm Schlumberger, said it is. “The proposed survey complies with the enforceable policies of South Carolina’s approved management program and will be conducted in a manner consistent with that program,” the company wrote DHEC’s director in March.

It notes that the state’s review is limited to “fisheries and sea turtle effects.”

“In the last year, commercial fishermen in ports adjacent to and in the district landed nearly 1 million pounds of snapper-grouper species and recreational fishermen along the South

Hewitt is a former DHEC board member.

In its application, WesternGeco says its surveys will be done over of areas of fish concentrations and “areas of concern,” but said “most of the survey activities will be outside Areas of Concern.”

Those areas include  federally-designated “marine protected areas” off Georgetown and Charleston counties.

Seasonal closure of fisheries along other parts of the coast will also help reduce the impact, the firm said. So will closures intended to protect marine mammals. “Fish and fisheries are also present in these areas, and areas where many marine mammals are likely to concentrate and trigger mitigations are areas where fish prey are likely in higher availability,” the company said.

As for sea turtles, WesternGeco said the surveys will be at least 19 miles from nesting areas. It will also have shipboard observers to watch for migrating turtles and pause the airguns if turtles are seen within 500 meters.

DHEC needs to consider the significance and impact of “destruction of endangered wildlife or vegetation or significant marine species” under the coastal zone program. “Seismic air gun blasts will cause marine life destruction,” he said.

The state’s coast is critical habitat for sea turtles. “Seismic air gun blasting would interfere with their nesting,” Hewitt said.

For fisheries, he points out that catch rates fall during and after seismic tests. “Studies show that seismic testing could decrease catch rates by as much as 80 percent,” he said.

Although a proviso in the fiscal 2020 state budget bars DHEC from spending money for permits or authorizations for infrastructure or activities related to offshore oil and gas, that doesn’t take effect until July 1. Hewitt said he isn’t sure that restriction would apply to the certification anyway.

Hewitt also said the certification is an opportunity for the state to make its feelings known to the federal government, which will ultimately issue the permit.

That is the position taken by a local group opposed to drilling and the tests.

“South Carolina has made it perfectly clear that we don’t want seismic and we don’t want drilling off our coast,” Peg Howell, a leader of Stop Offshore Drilling in the Atlantic (SODA), said.

It is frustrating that the review has come ahead of the proviso, she said, although she has heard different opinions about its affect on the review.

“It’s an opportunity for awareness,” Howell said. “It is a federal decision, but we have a lot to say about what happens up to 3 miles out.”