Stolen bird prints back on display at Hobcaw – Coastal Observer

Stolen bird prints back on display at Hobcaw 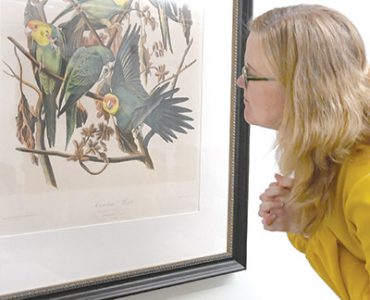 Lana Burgess studies the print of Carolina parrots, her favorite.

Seven rare prints of bird paintings by John James Audubon are back on the wall at Hobcaw Barony for the first time since they were stolen in 2003.

“It’s nice to see them,” said Richard Camlin, director of education for the Belle W. Baruch Foundation. “We’re happy to have them back.”

The prints may eventually go to Hobcaw House, but not Bellefield, Baruch’s home, where the print of a male wild turkey enjoyed pride of place over the fireplace in the sunroom. She had playing cards made with the bird’s image.

But the male turkey suffered the most from the theft. It had been removed from its frame and the linen paper across the top third of the 38-inch tall image was badly damaged.

“They’ve all had some pretty serious foxing,” said Camlin, referring to the rust-colored spots on the paper caused by oxidation.

Bellefield was built in the 1930s and didn’t have air conditioning. Moisture encouraged the oxidation. The prints had been kept in a shed after they were stolen, Camlin said.

Six of the prints were framed by a conservation firm after they were recovered in 2016. The male turkey was framed locally, Camlin said, because he wanted to include it in the display even though it  had lost its artistic value. It was a first edition from Audubon’s “Birds of America” and had once been valued at $100,000.

The piece still has historical value, said Lana Burgess, an art professor at the University of South Carolina’s McKissick  Museum. She is working with the Baruch Foundation to develop exhibits based on the 200 pieces of art in its collection.

Part of the value of the seven Audubon prints comes from their association with Baruch, Burgess said.

“Belle and her father butted heads a lot of times,” he said, but Bernard Baruch, the financier who acquired the former rice plantations that form Hobcaw Barony, agreed to the purchase.

The prints were reported stolen in July 2003 by Samuel McIntosh, who had been the curator of Bellefield.  Eight other artworks were also missing. At the time, they were valued at over $1 million.

One of the pieces was found at McIntosh’s home in Kingstree. He pleaded no contest to a charge of receiving stolen goods and filing a false police report. He received a three-year suspended sentence and 18 months probation.

The remaining art was not found.

In April 2016, the owner of an auction house in Laurens received a consignment that included two paintings of Belle Baruch by Alfred Munnings and the Audubon prints. The owner had contacted a professor at Converse College to catalogue the works. The professor had done work for the Baruch Foundation and recognized the stolen pieces.

The foundation later learned that the pieces were from the estate of the man who had helped McIntosh move from Bellefield, Camlin said. The family had not been aware of their origin.

The prints are now hanging in the Hobcaw Discovery Center on secure hangers.

They are “a portal to the natural world,” said Burgess, who gave a talk at the center last week.

The copperplate engravings were issued in groups of five between 1827 and 1838. The complete set totaled 435 plates.

“What makes his bird images so effective is he’s really interested in showing his birds in motion,” Burgess said. “That was his hook, what drew our attention.”

Hise personal favorite is the Carolina parrot.  The bird became extinct in the early 20th century.

The Baruch Foundation print is from a plate made in New York in 1860. It is also rare because the Civil War brought a halt to plans to issue a complete edition of “Birds of America.”