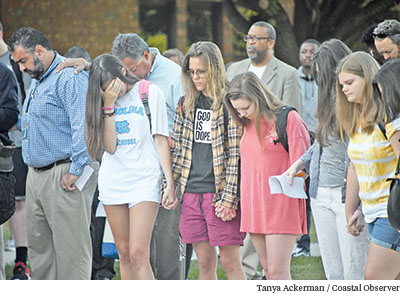 Over 300 students, parents and school staff gather for a prayer vigil at Waccamaw High following the suicide of a student last week, the second within six weeks.

A grief-stricken Waccamaw High School community gathered on Monday to pray, comfort each other and try to find a way forward after a student committed suicide last week, the second to take his own life since the beginning of April.

“It’s been a very emotional time for everyone involved, obviously,” principal Adam George said. “We have been trying and looking and searching for answers to what we can do to help and support more than what we have been doing, and what we continue to do.”

Hundreds of parents, grandparents, students, clergy and community members gathered at the school for a prayer vigil before classes started. Dozens then filed into the school’s auditorium to hear from George, Superintendent Randy Dozier and other district staff.

Dozier wants to make sure that students know how and where they can get help.

“We have a lot of resources in place for kids, if they would take advantage of them,” Dozier said. “We brought in counselors from all over the district and some district staff. They will stay here as long as it takes. If they have to stay for the rest of the year until the year closes out, we’ll have people dedicated here.”

Mike Caviris, the district’s director of special services, said the district will work with the National Alliance on Mental Illness to train teachers and will provide cards with a suicide prevention hotline number to pass out to students. A representative from NAMI will be at Pawleys Island Community Church tonight at 7 p.m. to talk about signs of mental illness. The event is free and open to parents and guardians of middle and high school students.

“It is tough for adults to come seek help, imagine if you’re a kid,” Caviris said. “We want to do the right thing to get these people help.”

The Waccamaw Center for Mental Health can have a counselor at a school within 60 minutes if needed, Caviris added.

Dozier said the district already had mental health programs in place, but two suicides in two months accelerated plans to a “new level.”

Genia Smith, the district director of curriculum, said that starting in the next school year, all high school teachers and staff will be responsible for checking in each week with a handful of students. They will spend 10 to 15 minutes with each student. The district will also host a workshops for staff and parents.

George said he and his staff were already planning to implement the policy. It is not a reaction to the recent tragedies.

“Students will have a teacher that they are going to be connected with all year, and they’re going to be not just meeting with them just to have a meeting, it’s going to be more structured,” George said. Teachers “will be checking in with them socially, emotionally, [about] school, athletically, whatever it may take down the line.”

Alan Walters, the district’s director of safety, knew both of the students who died and their families through the Boy Scouts. Walters said the father of one of the boys told him the family is not looking to assign blame and they asked the community not to blame anybody.

“It’s not the school’s fault, it’s not the coaches, it’s not the Scout leaders,” Walters said. The father said “they didn’t see it coming, how could they possibly expect others to see it.”

Walters will meet with officials from the state Department of Mental Health to see what programs are available to put into place at county schools going forward to get local clergy, parents and students involved.

“It has to be a group effort, we can’t do this by ourselves,” Dozier said.

While the meeting was going on in the auditorium, 80 mental health professionals were visiting every classroom. Issues discussed included the death of the students, how students felt about the deaths, coping strategies, and how to move forward.

In some classrooms, teachers led the discussion.

“We did not put counselors in the classroom without a familiar face,” George said. “[Students] are in there with the teachers they have been with for all of the school year.”

Counselors from Waccamaw Center for Mental Health and the state Department of Mental Health were also on hand ready to speak with students who wanted one-on-one help.

“They will be here for as long as we need them,” George said. “This is not something where it is a one-time thing. We will continue to support each other as much as we can.”

Counseling will be made available in the summer and during the next school year, and possibly years after that, George added.

“We realize that students, teachers [and] administrators, we have needs that need to be met,” George said. “The best way to do that is to open that line of communication. Find someone to talk to. Find a professional that can help us. We are doing that, and will continue to do that, among many other things.”

Hours after the meeting, dozens of students walked out of the school’s front doors and observed six minutes of silence. Two minutes for their late classmates, and four minutes for graduates who have committed suicide in the last four years.

Emma Deshaw, a senior, helped organize the walk-out. She said the tragedies have left her emotionally drained.

“After the first one you would think that we would have an assembly or something like that,” Deshaw said. “It just seemed to me the administrators never took it into their own hands to put something together so I decided that a walk-out would be a good way that we could all be together and make a stand and show that the students do want to change.”

After the six minutes of silence outside, the students split into groups to talk. The seniors and sophomores stayed in the auditorium and the freshmen and juniors went to the cafeteria.

“It’s so we don’t feel so alone, we’re all together” Deshaw said. “They were our teammates, our peers. We were in classes together. We saw them every day. We just want to spread mental health awareness.”

Dozier said students need to be able to recognize the warning signs that a classmate or friend is struggling, and have the courage to say something.

The district has an anonymous tip line on its website where anybody can report an issue that they know about, or suspect. The link is called “School Safety Quick-Tip” and can be found under the quick links tab.

“This is another tool we have that we can reach out and help people, if we know,” Walters said. “That first step is a challenge. It’s getting somebody to say something.”

George said there are a lot of questions, but he’s not sure anybody has answers.

“We’re here, we’ve been here, and we’ll continue to be here,” he added. “We are going to continue to support our students and support each other.”