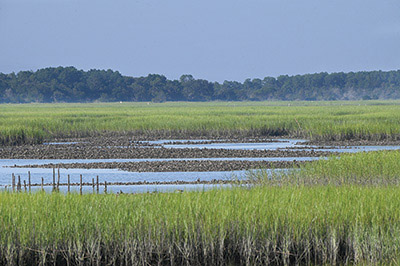 Students said they were concerned about the impact of development on shellfish beds.

More data is needed to assess the threats to Murrells Inlet, and more cooperation among residents is needed to help mitigate those threats, according to a study by students at Coastal Carolina University.

The findings were the result of a project by the first class in the university’s new major in sustainability and coastal resilience.  It was an undergraduate project, not doctoral research, said Pam Martin, the professor who taught the class, but inlet residents who heard the results last week said they struck a chord.

“Everyone in this room is here for a reason, they’re concerned,” said Roy Lusk, a volunteer who helps monitor water quality in the inlet, after hearing the initial results last week. “The next step is action.”

The study was the work of five students over two months this fall. They focused on an area from the beachfront at Garden City west to the Bypass 17 corridor looking at the impact of the environment and the economy on the quality of life.

“Nature, people and economy represent the three pillars of sustainability,” said Bailie Willis, who is one of the first sustainability majors.

They applied sustainable development goals adopted by the United Nations to each of those three areas. For instance, the goal of promoting sustainable economic growth led them to conclude that more eco-tourism activities would help shift growth from activities that harm the environment.

Amanda Giambi, a self-described “science nerd,” said she was most surprised to learn about the impact of the inlet itself on the local economy. That impact was measured in a 2013 study by an economist at Coastal Carolina. He put the impact at over $720 million.

But Giambi was also struck by the amount of development in the area over the last decades and its impact on the environment.

She worked with a student at Furman University to access mapping data. It showed how the developed area grew between 2001 and 2019 and how the tree canopy had declined.

“The amount of high-intensity development is dramatically higher,” she said.

Anastasia Gluth, an exchange student from Germany, was the only graduate student in the group.

“The entire problem of do we want development or do we want to save our environment is the same everywhere,” she said.

It was a challenge to find data on some of  the impacts, despite the water monitoring being conducted  through Coastal Carolina, the students said.

They recommended several steps to reduce runoff into the inlet and help maintain the oyster beds that protect the marsh. The list was not comprehensive, Giambi said.

“Unfortunately, they only had two months, and I would like to keep them for two years,” Martin said.

“Murrells Inlet as a community needs to come together and work together,” Giambi said.

The students hope that the study, which will be available online once completed, will help bring awareness to the issues, Willis said.