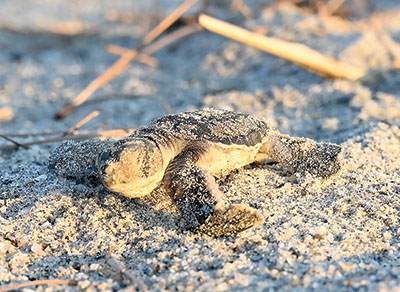 Green sea turtles, like this hatchling on Pawleys Island, saw the most impact of all turtle species.

The loggerhead sea turtle that was found washed ashore in Midway Inlet on a June morning five years ago was missing part of its right front flipper. That was the least of its problems.

It was later found that the turtle had ingested what a biologist at the S.C. Aquarium called “an impressively large amount of plastic.” That included pieces of a plastic bag and a red rubber balloon.

The immature loggerhead, named Midway at the aquarium’s sea turtle hospital, was one of nearly 1,800 marine animals in the U.S. affected by plastic waste over the last decade in a study by the conservation group Oceana. It’s a number that the authors say “should be considered a gross underestimate of the U.S. problem.”

The study, released today, is the first to draw on data compiled by federal agencies and organizations that work with marine life. It covers the years 2009 to 2018. Of 1,792 cases where the animals consumed or became entangled in plastic, 861 were sea turtles. Of the 930 cases involving marine mammals, 730 were Florida manatees.

“Before now, the evidence that many U.S. marine mammals and sea turtles were being harmed by plastic was not compiled in one place. While there may never be a complete account of the fate of all marine mammals impacted by plastic, this report paints a grim picture,” said Kimberly Warner, one of the report’s authors and a senior scientist at Oceana.

The report follows data released this summer by the Pew Charitable Trusts that predicts that the amount of plastic waste entering the oceans could triple over the next 20 years. It is currently estimated at more than 12 million tons.

The Pew analysis also showed that current efforts by government and industry to reduce that flow would only curb the waste volume by 7 percent.

“The only way to turn off the tap and protect our oceans is for companies to stop producing unnecessary plastic, and that will require national, state and local governments to pass policies ensuring they do,” said Christy Leavitt, an author of the Oceana report and director of its plastics campaign.

After the Midway stranding in 2015, the local volunteer sea turtle monitors at SCUTE used their popular public inventories of hatched nests to tell people about the threats posed by plastics.

“We feel like education is helping because we don’t see the plastic left on Pawleys that we used to,” said Mary Schneider, who leads the SCUTE volunteers on the island. “We’re talking to the children. They’re talking to their parents and grandparents.”

In its report, Oceana criticizes the plastics industry for shifting the blame for plastic waste to consumers. “And so, plastic production continues to grow,” the report states.

It focuses on the need to reduce the production of single-use plastics and increase the availability to consumers of alternate materials.

Most of the plastics eaten by the animals included in the report were unidentifiable, the authors say. But of those that could be identified were mainly single-use items.

“It’s not just the items that first come to mind, like bags, balloons and bottle caps,” Werner said. “These animals are consuming or being entangled in everything from zip ties and dental floss to those mesh onions bags you see at the grocery store.”

The impact of plastics on wildlife has been known for decades. But it wasn’t an issue when SCUTE was founded in 1989 by Jeff McClary and the late Chris Marlow. They were focused on beachfront lighting that disoriented the hatchlings.

“It was 18 years before we saved our first turtle,” McClary said. They had plenty of cases of sick turtles washing ashore, but “by the time you could arrange transport, they would die.”

Before the S.C. Aquarium, the turtles would be taken to a facility in North Carolina. With the growth of more care facilities, the data improved, McClary said.

He agreed that the Oceana report’s data only touches on a small portion of the problem. McClary recalled that Sally Murphy, the long-time sea turtle researcher with the state Department of Natural Resources, estimated that the hundreds of sea turtles that stranded on the coast in the 1980s represented only about 10 percent of those that were actually ill. And the strandings were only large turtles.

The Oceana data “is a big deal, but the bigger picture is how the plastics are impacting the juveniles and sub-adults,” McClary said.

The Oceana report touches on that.

“Over 20 percent of sea turtle cases with plastic ingestion were recently hatched turtles – only a few days to a few months old,” the report found. “Younger sea turtles are very vulnerable already since their survival rates are low.”

Some of those affected still had the “egg tooth” that allows them to break out of their shell.

“This means these newly hatched animals ingested plastic within days of making the strenuous crawl to the ocean and into open water,” the report states.

The report also noted that nearly 90 percent of the species included in the study are federally-listed endangered or threatened species, including all species of sea turtles.

Green sea turtles accounted for 40 percent of the sea turtles impacted by plastics. Loggerhead, which make up largest portion of South Carolina’s sea turtles, made up 30 percent of those included in the Oceana report, but of the 261 turtles affected over half were juveniles. Almost all the impact on loggerheads came from ingesting plastic.

“The incidents detailed here are merely the tip of the iceberg,” the report states. It acknowledges that in addition to a greater likely impact from large plastics, there is the issue of microplastics “doing harm we do not yet fully understand.”

A citizens science project to look at microplastics on the beach was put on hold this year because of the coronavirus pandemic, said Erik Smith, manager of the North Inlet-Winyah Bay National Estuarine Research Reserve at Hobcaw Barony.

“From the little bit we have surveyed around here, it is the degradation products” of plastics that are having an impact on the estuary, he said. “Plastics don’t go away. They go on and on.”

The ongoing research in the estuary has focused on the natural systems. Researchers have recently started to look at the biological impact of microplastics.

“There is a question of are they just inert and out there or are they out there and a source of toxicity,” Smith said. “It’s definitely an area where the more we look, the more we see these microplastics. It is valid to ask what is the impact.”

He noted that there are really two tracks on the plastics issue, and they aren’t mutually exclusive.

“It’s hard to argue against trying to reduce the use of single-use plastics,” Smith said.

That’s what Oceana is arguing for. Several communities in South Carolina have tried to do that through bans on plastic grocery bags, foam cartons and straws. Those local ordinances led state lawmakers to propose a “ban on bans.” It has not made it through the last two legislative sessions.

State Rep. Lee Hewitt of Murrells Inlet was on the House Environmental Affairs subcommittee when the first ban on bans was introduced. His constituents favor the local bans, he said.

“It gets into the home rule issue,” Hewitt said, referring to the ability of local governments to decide such issues.

It also shows the divide between the coast and the interior of the state.

“In the coastal area there would be a willingness to do that,” Hewitt said of a plastics ban. “Like offshore oil, those on the coast understand it.”

In the Upstate, “it’s not that big of an issue to them and their constituents,” he added.

But Hewitt said it could be easier for the legislature to restrict plastic bags than offshore oil and gas drilling.

“It’s a terrible optic to say you’re against the sea turtle,” Hewitt said.