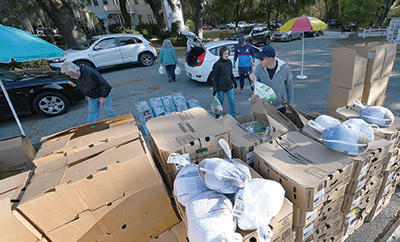 Food for Thanksgiving dinners is distributed at the Baskervill Food Pantry.

More than one out of every 10 Georgetown County residents lacks consistent access to enough food  to live an active, healthy life, according to a recent study.

This food insecurity is at its worst in the southern and western parts of the county, according to the study commissioned by the Baskervill Food Pantry and Georgetown RISE, a coalition of governments and nonprofits focused on sustainable development.

“No community that is sustainable is hungry,” Pamela Martin, executive director of Georgetown RISE, said during one of the public presentations of the results of the survey, which was conducted by staff and students at Coastal Carolina University.

The study found that 6,900 people, 11.1 percent of the population, face food insecurity.

Baskervill, which is located on the campus of Holy Cross-Faith Memorial Church, has recently expanded its reach into the western part of the county thanks to a program called Blessing Forward, started by Renee Ford.

Baskervill volunteers pack about 125 bags of food each week, which Ford personally delivers to individuals and churches for distribution.

Blessing Forward got the nonprofit pantry’s leadership team, including co-coordinator Nancy Cave, talking about how they could continue to have enough food to sustain Ford’s program.

The team had already been talking about expanding its outreach, which lead to them teaming up with Georgetown RISE on the CCU survey.

“I kept saying, ‘we need some data, we need to know where food is available, and where the need really is,’ ” Cave said.

According to the study, the top three barriers to food access in the county are communications, availability and access.

While working on the survey, Michelle Dzurenda, a doctoral candidate at CCU, identified 60 possible food resources in the county. Upon further investigation, Dzurenda found that many of the resources didn’t answer the phone or had a wrong number listed, while others were only open for a limited time.

Increasing access to food involves increasing the hours and days that pantries are open, according to people surveyed.

Another issue is availability of food for children and seniors who have specific dietary needs. Of the county’s 62,680 residents in 2019, 13,000 were children and 12,000 were seniors.

Thirty-one percent of the children were categorized as “impoverished,” and more than 800 lived at least 10 miles from the nearest grocery store.

The Department of Agriculture only considers stores within 10 miles of a home to be “high access” for families, and only if the family has access to a vehicle.

Nearly 4,000 households in the county received benefits from the federal Supplemental Nutrition Assistance Program (SNAP). Of those, approximately 350 were at least 10 miles from the nearest grocery store.

The CCU survey questioned where people who are enrolled in SNAP can use the benefits if they can’t get to a grocery store.

Along with Georgetown County residents, Baskervill has also serves people from Horry and Williamsburg counties.

Last year, the pantry saw a 30 percent increase in the number of people requesting food. Cave said the numbers dropped off a little earlier this year when federal stimulus money came through, but have begun to increase again.

“Not to the numbers that we had during the height of COVID, but they are increasing,” she added.

Helping Hands of Georgetown has also seen a decrease in clients since the spring. Tracy Jones, the nonprofit’s operations manager, said that coincided with an increase of food distributions in the county.

“It seemed someone was hosting one practically daily,” Jones said. “Food stamps cards were continuing to be loaded. Why come to a food bank where you are given a bag when you have free money to go buy what you want at a store?”

Collaboration between the nonprofit, public and private sectors was another recommendation in the CCU survey.

One of the ideas that came out of the presentation of the survey results was for nonprofits like Baskervill and Helping Hands to partner on food distribution with churches, the Georgetown County School District, and entities that are already working with low-income residents, like the St. James-Santee Family Health Center.

The next step may be to do an assets survey, to see what all the different groups can bring to the table.

“Who has vans that could go out? Who has volunteers that can drive to different places? Who has extra food storage capabilities?” Cave said. “Those are real questions we have to find out.”

“Obviously food costs money,” she said. “How are we going to share the cost of this food going out? Or is each pantry going to take responsibility to raise their own money.”