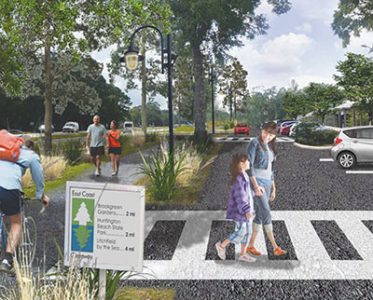 A conceptal drawing of the Highway 17 corridor shows enhanced pathways and landscaping.

Half of the land on Waccamaw Neck that is available for development ought to be preserved, according to a land-use study prepared for Georgetown County. That amounts to about 950 acres.

Land preservation is among 10 initiatives proposed for the next five years by Stantec, a global design and engineering firm hired by the county last year to review land use along the Highway 17 corridor. Following a series of public meetings last fall, the firm was due to present a draft of its recommendations this spring. That was derailed by the coronavirus outbreak.

Stantec completed the draft at the end of May. It was delivered this week to local officials and members of an advisory committee.

“I thought it was comprehensive, very good,” said County Council Member Steve Goggans, who pushed for the $200,000 study along with a $100,000 update to a 2003 traffic study on Highway 17. “This is a guide to more skillfully develop the area.”

The traffic study by AECOM, funded by the Grand Strand Area Transportation Study, presented a draft of its recommendations in February. Those included three new traffic signals, three roundabouts on side streets, closing 12 median cuts and extending the raised median in the Pawleys Island area. Like the 2003 study, it also proposed expanding the highway from four to six lanes.

“Stantec is a little more pedestrian and bike oriented. AECOM is more about getting the traffic through the Neck,” said Boyd Johnson, the county planning director. He and Mark Hoeweler, the executive director of GSATS, are working to set up a virtual meeting between the two sets of consultants that will lead to a unified plan that the public can review.

County Council Chairman John Thomas was not impressed with either plan. “It’s shelfware to me,” he said.

Thomas is focused on a third land-use exercise: the state-mandated update to the county’s future land-use plan that was supposed to be completed in 2018. “That’s the document that will influence future land-use decisions,” he said.

There are 44,000 acres in the Waccamaw Neck study area. Of those, 25,800 are either publicly owned or restricted to conservation in some fashion. Another 4,400 or so acres are wetlands. When developed property and vacant parcels of less than an acre were subtracted, Stantec estimated that only 1,900 acres are “capable of supporting significant development.”

The county can preserve half of that land “through prioritizing sustainable development techniques,” the study says.

It recommends the use of “form-based zoning” that focuses less on the land uses and more on the design of the public spaces. That would be applied only to areas that are already developed in anticipation of future redevelopment.

The county should allow residential uses in areas now zoned for commercial use. “If the Neck is going to have pockets of higher density (higher density being a relative term), they should be located in mixed-use areas that can support pedestrian activity and vice versa,” the study says.

New development on parcels of 10 acres or more should have 50 percent open space, it says.

The tree ordinance and landscaping standards should be upgraded and apply to new projects, including single-family homes, Stantec recommends. It proposes reducing setbacks in the “general residential” zoning district in order to save trees by making building sites more flexible.

On parts of Highway 17, the setback should be changed “to highlight building architecture over parking lots,” the study says.

The three golf courses that are not in a “planned development” district – Founder’s Club, Caledonia and Litchfield Country Club – should be designated as open space in the future land-use plan, Stantec says. The county Planning Commission adopted that idea independently last week.

Stantec also recommends the county direct future development toward the redevelopment of areas around major intersections, such as Waverly Road, Willbrook Boulevard and Riverwood Drive. To do that and meet the 50 percent preservation target, it proposes using a “transfer of development rights” program.

“A TDR program can help strike a balance that is socially, economically and environmentally sustainable,” the study says.

The county would designate areas it wants to preserve as “sending zones” where the development rights could be sold to property owners in “receiving zones,” where growth would be encouraged. Conservation easements or deed restrictions would protect lands in the sending zones.

Most of the recommendations could be done without changing the area’s existing zoning, Goggans said, which is important because “without getting into some serious legal problems, you’re going to have a hard time turning back the clock.”

While the study recommends areas of higher density, “it brings about a better designed community without increasing the density that’s already allowed,” Goggans said.

Thomas is concerned that changes to density could be allowed under the revisions to the future land-use plan. The current version says density should be increased only if “usable” open space is provided.

“There are no words like that in the new draft,” he said.

The recommendations from Stantec could be adopted as an appendix to the land-use plan or included in the plan’s goals and strategies. Some are there already, such as the use of transfer of development rights.

“They’re very much in line with our in-house philosophy,” Johnson said. “They really are promoting open space. That’s a major part of what we want to explore.”

Update: Staff from Stantec and the planning department will review the study and takes comments during an online forum Dec. 10. It starts at 5:30 p.m. Go to georgetowncountysc.org for log-in information and to get a copy of the study.