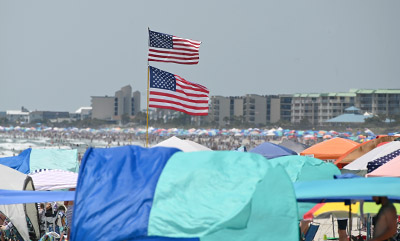 A boom in visitors since the start of the pandemic has increased accommodations tax revenue.

A windfall in taxes paid by people who rent vacation properties has yet to find its way to the organizations that rely on the revenue to help fund their activities. Despite a rise in rentals fueled by the coronovirus pandemic, Georgetown County is still unsure how much it can allocate for accommodations tax grants.

“Six hundred thousand dollars of stuff is not going to be approved,” said Kathi Grace, who chairs the Accommodations Tax Advisory Committee. “This is painful.”

The county receives quarterly payments from the state, which collects a 2 percent tax on short-term rentals. The payment for the quarter that includes the three summer months has not arrived.
“We’ve never had a meeting where we don’t have that first quarter number in stone,” Grace said.

What was set in stone was $1.8 million in requests from nonprofits and county government offices for a share of the revenue, which the law requires to be used for tourism-related activities.

The advisory committee estimated it had around $1.2 million to allocate.  That’s an increase of almost 22 percent from the last fiscal year. But data compiled for the Chamber of Commerce, which handles tourism marketing for the county, showed accommodations tax collections in the unincorporated areas of the county rose by almost 33 percent.

The chamber was recommended to receive the largest share of the money on hand: $630,111, which will be added to $511,000 it expects to receive from that accommodations tax to market the county to tourists. The chamber conducts the marketing and advertising for the county Tourism Management Commission. It had asked for almost $700,000 from the advisory committee.

This year’s allocation, if approved by County Council, will be an increase of 27 percent over the amount it received in 2020.

The chamber was also recommended to receive $50,050 to update the tourism commission’s strategic plan.

The committee zeroed out a request from the county’s Parks and Recreation and Public Services departments for $250,000 to install lighting on Business 17 near the Murrells Inlet Marshwalk and at Morse Park.

The committee also recommended denial of a $55,000 request from the Georgetown Business Association to help hire a tourism and development director.

“This is a very needed thing,” said committee member Lauren Joseph, whose husband serves on City Council. But she pointed out that state law requires that the money be spent in the areas where it is collected. The city of Georgetown also receives state accommodations tax, but none is allocated for the new position.

“I appreciate what you’re trying to do,” Grace said. “I just don’t feel it’s this entity’s job to fund it.”

Jack McManus, an association board member, said the city had been working with Georgetown County on economic development. The city can’t afford its own tourism director, he told the committee, but it might be able to by increasing overnight visits.

“If the city could come up with a match or something, perhaps we could make the case,” Joseph said.

The business group was recommended for $30,000 for its summer Music in the Park series.

The advisory committee recommended full funding ($81,869) to the Parks and Recreation department’s beach access and bike path cleanup project and to the Litchfield Beaches Property Owners Association ($73,350) for its maintenance and clean up of beach accesses. Both efforts saw costs rise due to the volume of trash.

“We can barely keep up with the trash barrels,” said Beth Goodale, the Parks and Recreation director. “The beach users are just incredible.”

Joseph suggested the Parks and Recreation request could be trimmed because the county has other money that could pay for the work.

“If it weren’t the beaches,” Grace said, she would agree. “This is precisely what accommodations tax has been charged with paying for.”

Committee member Ebony Hughes, attending her first round of meetings, suggested that the committee could reduce the $27,000 request from the Garden City Community Association to maintain a portion of the median on Bypass 17.

Her colleagues told her that the same principle that limits spending in the city of Georgetown guarantees that Garden City gets full funding.

The landscape funds and $7,000 for street lights is the only direct request from the community.

“They have a very small request,” Grace said.

Johnny Weaver, who chairs the board of the S.C. Maritime Museum, told the committee that principle could also apply to his organization, which wants $54,000 to replace the floor in the museum. The facility and its Georgetown Wooden Boat Show “bring in thousands of visitors,” he said.

“I wish we had more,” Joseph said.

The Georgetown Bridge2Bridge Run was recommended for $15,000, the full amount requested by the race committee.

Three beautification projects along Highway 17 had their requests scaled by 30 percent. “We are reaching the point where we are spending hundreds of thousands of dollars to mow grass,” Grace said.

The sheriff’s office asked for funding to increase its beach patrol from three deputies to four. It was recommended for $188,578, the same amount approved last year for three deputies.

Midway Fire and Rescue asked for $11,400 to provide a beach patrol on holiday weekends and upgrade equipment. It got $9,600 because Grace said the Pawleys Island Rotary Club agreed to donate $1,800 to the program.

County Council is due to vote on the recommendations Dec. 14.

Grace said she would like to coordinate requests for a share of the state accommodations tax with allocations the county makes from local accommodations and hospitality taxes.  Collections from the 3 percent tax on short-term rentals and the 2 percent tax on restaurant and bar sales increased 26 and 16 percent respectively in the last fiscal year.

Georgetown County has budgeted $2.34 million from those taxes for the sheriff’s office, $1.9 million of the county general fund and $570,000 to Midway Fire and Rescue.

Grace would also like the county to coordinate its state accommodations allocations with those of the town of Pawleys Island and the city of Georgetown.