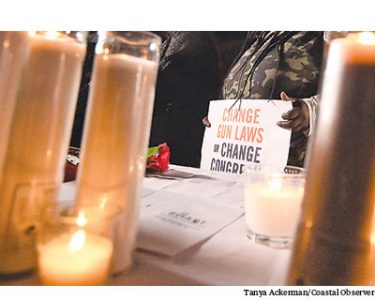 A vigil was held for Deondre Brown after his murder last month.

A Pawleys Island teen says the man he is accused of killing two weeks before Christmas beat and robbed him hours before the shooting, according to the Georgetown County Sheriff’s Office.

Aiden Marshall Zasimovitch, 17, was arrested Dec. 12 after investigators said he admitted shooting Deondré Ontonio Brown, 20, with a .22 caliber rifle outside a home on Martin Luther King Drive at approximately 8:45 p.m. on Dec. 11, according to the warrant.

In a Dec. 12 report released this week by the sheriff’s office, Zasimovitch told investigators that Brown and Colby Monroe Barnes, 18, assaulted him at his home on Woodpecker Lane around 4 p.m. on Dec. 11 and stole approximately 1 ounce of marijuana. The robbery was not reported at the time.

Zasimovitch and an unidentified 15-year-old planned to rob Brown, according to the warrant. The 15-year-old reportedly set up a meeting with Brown at his grandmother’s house while Zasimovitch waited in nearby woods.

Brown was sitting in a car with his aunt and uncle around 8:30 p.m. on Dec. 11 when he got a phone call and started arguing with the caller. He then got out of the car and walked toward the east side of the house.

Brown’s uncle told investigators that he heard gunshots and saw muzzle flashes near the road.

“They were determined to kill my grandson,” said Carrie Williams, Brown’s grandmother.

Bullet holes were also found in the house.

Brown then ran back to the east side of the house to tell his aunt and uncle to run to safety before dying.

The morning after the murder, Zasimovitch, Barnes and the 15-year-old were taken out of class at Waccamaw High School for questioning and then arrested.

Zasimovitch was charged with armed robbery and murder.

The sheriff’s office has not released information about the charges against the 15-year-old because he is a juvenile.

Brown had also attended Waccamaw High but dropped out and eventually graduated from Wil Lou Gray Opportunity School in Columbia in 2018.

Two years before his murder he had survived a shooting.

On Dec. 14, 2017, he was shot in the chest and wrist at a community boat landing in the Waverly neighborhood. Emergency medical workers who responded to the shooting found a “sippy cup” containing marijuana in Brown’s pocket. A man with Brown that day was found with 28 grams of marijuana and charged with possession with intent to distribute.

Williams said her grandson was trying to turn his life around.

“He was just a loving person. This boy would do anything for his family and friends,” Williams said. “He would cheer people up. That’s the type of person he was.”