The curtain will rise, but masks will stay in place – Coastal Observer

The curtain will rise, but masks will stay in place 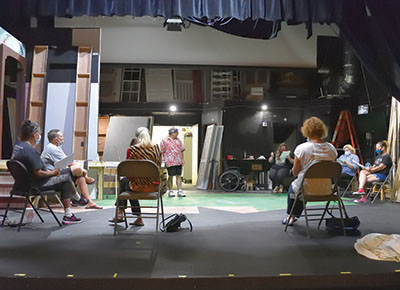 In the midst of the COVID-19 pandemic, there are signs that the arts are returning to the area.

The Swamp Fox Players plan to return to the stage in September and authors have been speaking at Moveable Feasts since last month.

Director Lee Padgett describes “Independence Day at Happy Meadows” as “a good episode of “The Golden Girls.” It is the story of four residents of a nursing home who hatch a scheme to escape and attend a Fourth of July party.

People planning to attend will be required to wear masks, but the actors will not.

Only about one-third of the seats in The Strand Theater will be filled during performances. Audience members may have to wait outside on the sidewalk and be seated a handful at a time, since there is not enough room in the lobby to social distance, and leave the theater in small groups at the conclusion of the play.

This will be the first Swamp Fox production since a cabaret show March. Plays scheduled in May and July were canceled.

“We’ve had to cancel in the past, but it usually wasn’t an entire run,” Padgett said. “And two in a row.”

The production came together in a little over a week.

Padgett discovered on July 30 that Gov. Henry McMaster had allowed entertainment venues to reopen, with conditions. He called Foy Ford, who is the manager of The Strand, and the two of them quickly decided to move forward with a new production.

“We didn’t go through the board or anything because we had six weeks and two days to get this show on the road,” Padgett said. “There was no time for anything other than to get moving.”

Nine days from that initial conversation, Padgett was finishing up his second set of auditions and putting his cast in place.

He has his fingers crossed that nobody in the cast or crew contracts COVID-19, which would mean a quarantine for that person, and possibly other cast and crew members.

“I’m just hoping whoever is in the cast, they stay smart, they stay safe and we pull this off without a hitch,” Padgett said.

Padgett may cast extras who can fill in. He can do this, he said, because 20 actors came and auditioned.

“Turnout was high for this play. I attribute that to people ready to do something, ready to get on with life, ready for some sense of normalcy,” Padgett said. “It’s been wonderful. It did my heart good.”

The weekly Moveable Feasts, which give readers a chance to have lunch with and hear from authors, stopped in mid-March when the governor began restricting public events due to the pandemic.

By June, publishing companies were hosting online events for their best-selling authors instead of sending them around the country.

“A lot of people are loving them and doing them,” said Linda Ketron of Art Works, who hosts the feasts. “I have a feeling the big publishers are going to say, ‘this is a cheap way to do this.’”

So Ketron decided to recruit local authors for feasts.

“It sort of takes me back 23 years to when we started,” she said.

The first one was July 10, and Ketron now has events scheduled through September.

“I have a feeling the word will get around, and there will be other authors that will be excited by the opportunity,” she said.

Many of the authors are self-published.

“There are people who have written things that that’s what they want to say,” Ketron said. “Those are the people that I’m inviting to speak.”

A pre-COVID feast would attract between 160 and 300 people, depending on the size of the restaurant. Ketron is capping attendance now at around 40.

“It’s not the capacity,” she said. “It’s the comfortable capacity in all of these places.”

Attendees are required to wear masks when not eating, and in most cases only four people can sit together.

One place you won’t see any live entertainment is the Winyah Auditorium in Georgetown.

Winyah’s board of directors canceled all spring concerts in mid-March, which cost them about $15,000 from ticket sales, and decided not to host any shows in the fall.

The board received a $2,000 grant from S.C. Humanities, which kept the phone and internet connected, and raised around $4,000 from Friends of the Winyah to pay for all the facility’s insurance premiums. There was also $5,530 donated on Palmetto Giving Day.

The county has promised $20,000, which Lusardi said should keep them afloat, but only if they get the money before February when it is usually handed out.

Ten concerts from Winyah were live-streamed on Facebook in June, along with pleas for donations.

“It didn’t quite cover costs to do that,” Lusardi said. “We just wanted to keep music accessible in the community.”

Depending on the number of coronavirus cases in the county in January, the board is hoping to reopen Winyah. Lusardi said many of the musicians whose concerts were canceled have indicated that they want to reschedule.

There are tentative plans for weekly jazz concerts on Friday nights.

“We want to bring music to town, but we want to keep people safe at the same time,” Lusardi said. “We are committed to being there when it’s safe to have live performances again.”