The last voyage of the Grundoon – Coastal Observer

The last voyage of the Grundoon 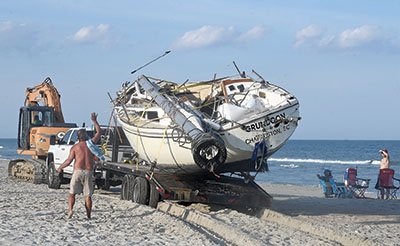 Josh Powers tosses his boat hook aboard as the sailboat is hauled away.

An east wind brought the sailboat ashore. A twin-axle trailer took it off. In a month spent on the edge of Litchfield Beach, the Grundoon drew hundreds of onlookers eager to see if it could be made to float.

“I’ve been following this for a month,” said Tammy Bibee, who lives in Tennessee. She came to the coast last week to visit her friend Pandora Shahady in Murrells Inlet. They headed to Litchfield Beach.

After posing for a photo in front of the hull, Bibee spotted Josh Powers, owner  of the Grundoon. Shahady snapped a picture of Bibee and Powers just before the 30-foot Catalina made its final trip.

Powers bought the 36-year-old boat last fall. He lived aboard it in Georgetown. Over the Memorial Day weekend, he sailed up the coast to Murrells Inlet. “Sometimes I go to a place for a day or two and end up staying a month or two,” he said.

He stopped over at Litchfield, anchored off the beach and swam ashore to the Litchfield Inn for dinner.

The low pressure system that developed into Tropical Storm Bertha was forming off the South Carolina coast. The waves picked up after Powers returned to the boat. The anchor line chafed and broke around 1 or 2 a.m. on Memorial Day.

He called a towing service. The estimate was $5,000. “I don’t have an extra five grand lying around,” Powers said. “I might even try to do it myself.”

The first attempt didn’t go well. A small front-end loader scraped sand from around the boat and tried to push it into deep water on the next spring tide. A fishing boat with a 250-hp outboard motor came to help tow and dozens of volunteers added their shoulders to the effort to shift the boat and its 4,500 pounds of ballast. The tow line broke.

The next day, the shrimp boat Lila Lee came from Murrells Inlet to tow the Grundoon. But the surf was high. Volunteers struggled to keep the sailboat pointed into the waves. Midway Fire and Rescue was called when someone was reported hurt. The tow line parted. The effort was abandoned.

The next attempt brought Joseph Dickinson and a crew from D&W Sitework with a small trackhoe. It moved the Grundoon into the surf, but dislodged the mast from its footing on the deck.

As the boat pitched in the surf, the mast fell over. A day later, the keel separated from the hull. Powers plugged the holes with cement, but the Grundoon would never return to the sea.

D&W returned with a bigger machine and a trailer. Dickinson tried to lift the boat with chains slung under the hull. It stuck halfway on the trailer.

Powers’ brother, Andrew, signaled to Dickinson. The jaws of the trackhoe ripped into the deck and pulled the boat on to the trailer.

He applauded the D&W crew as the trackhoe was chained to the four-wheel-drive pickup that towed the trailer. The small caravan headed north to the emergency vehicle access at North Litchfield. From there, the wreckage was hauled to a lot the company rents off Martin Luther King Road. The engine and fittings were removed. The hull was crushed and hauled to the county landfill.

“There wasn’t much left,” Dickinson said. The mast sits on a pile with other pieces of metal waiting to be hauled to a scrap yard.

A gofundme page raised $8,000 to cover the cost and help Powers find a new home. Someone also gave him a 25-foot Hunter sailboat. “It’s a little smaller, but that’s all right,” Powers said.

The new used boat is in Philadelphia. He arrived there this week.