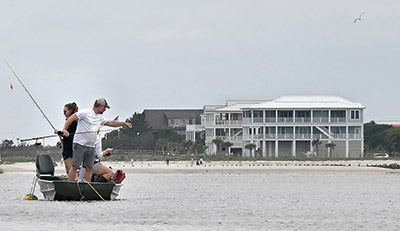 The town wanted to shift the style away from a “boxy look” to traditional cottages.

A house that meets the town’s new architectural code doesn’t necessarily need to have the “Pawleys Island look” the rules were designed to promote. Six months and four sets of plans after the creation of an Architectural Review Board, members say they are unsure how much influence they have.

“We don’t have any criteria as to what it’s supposed to look like. That’s what we need to talk about,” board member Linda Keller said after the board approved one of those plans this week.

The plan for the house at 102 Atlantic Avenue “checked every box,” Administrator Ryan Fabbri told the board.

The town adopted a set of guidelines for the ARB to use in reviewing new homes, but  board members said they are uncertain whether those are just recommendations.

If a plan meets the requirements of the development code “I thought we couldn’t do anything,” board member Frank Robinson said.

The house on Atlantic Avenue meets the code. The second floor has 80 percent of the first floor living space. The designer, David Lane, achieved that by cutting out porch space under the roof. The roof also meets the required 7-12 pitch.

Graham suggested louvers between the columns that support the house.

“The homeowner loved that. That was a great idea,” Lane said.

Graham suggested eliminating a deck above a porch because the guidelines say porches can’t be stacked.  “It would help scale down that front,” he said.

Since it isn’t covered, it’s a deck, not a porch, Lane said.

“I don’t know if we need to distinguish between a deck and a porch,” said Ken Leach, who chairs the ARB.

But he noted that the intent of the design code was to create a story-and-a-half cottage look.

“David kept the two-story box and carved out underneath to get the 80 percent,” Graham said. “I’m not saying he’s wrong.”

In fact, Graham said Lane agreed with most of his suggestions.

“It’s still not getting to the Pawleys Island look,” Keller said.

After approving the plan, the board voted to recommend that Lane ask the owner to replace stucco at the entrance with brick to create a more traditional feel. Lane said he would, and he added that he thought the process was helpful.

The board deferred action on a second design. It has more of a cottage look, but meets the 80 percent rule by having a high ceiling on the first floor that reduces the space on the second floor.

It was designed by the Earthworks Group, which didn’t meet with Graham.

“It looks like Pawleys Island to me,” Fabbri said.

But board members were concerned that the plan shows space for an elevator that wasn’t included in the drawings.

“The intent of the ordinance was to encourage people to have a dialog,” Leach said.

Fabbri said he would have encouraged the owner, Anne Sauls, or Earthworks to attend if the board had raised any concerns.

“The way it was supposed to work is that we would work together as a team,” Graham said.

The board will take up the plan in January. In the meantime, Leach said, the board should consider what to do with a plan “where it just doesn’t feel right.”

“We don’t want to be difficult,” Robinson said.