The spirit of ’76: County prepares for 250th anniversary – Coastal Observer

The spirit of ’76: County prepares for 250th anniversary 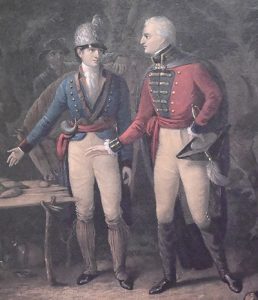 Detail from an engraving of the 1841 painting of Francis Marion by John Blake White in the collection Georgetown County Museum.

There will be fireworks.

But when the smoke clears on July 4, 2026, the state commission preparing for the celebration hopes it will reveal a clearer picture of the struggles that led to the founding of the United States and find local communities better able to tell those stories.

“We really want local communities to discover their stories,” said Charles Baxley, a Kershaw County attorney who chairs the SC250 commission. “We want to, as a commission, help people get ready for the tourists that will come, because there will be international publicity about the 250th of the American Revolution.”

The state commission, formally known as the S.C. American Revolution Sestercentennial Commission, is encouraging each county to form its own commission to plan for the commemoration, which runs through 2033. Those that do, will have access to grant funds, currently $7 million.

The commission held its quarterly meeting this week at Hopsewee Plantation, hosted by the owners, Frank and Raejean Beattie. The plantation is the birthplace of Thomas Lynch Jr., a signer of the Declaration of Independence. The commission reviewed more than a dozen grant requests, which included research, preservation of historic sites, tourism planning and events.

“The economic impact on Georgetown County has the potential to be amazing,” said Mary Boyd, who is leading the effort to organize the local commission. She is a past president of the county historical society and long-time volunteer at the Georgetown County Museum.

Boyd expects County Council to adopt a resolution creating the commission this month. The Chamber of Commerce has agreed to serve as the fiscal agent, she said, which will allow the local body to apply for grants. The chamber also provides support to the county’s Tourism Management Commission.

She wants to include a wide range of people in planning for the 250th anniversary. The museum hosted a reception for the SC250 commission that included representatives from historical, cultural and business groups.

That is the model of collaboration that the state commission encourages, Fortune said.

“We say, bring in some of your downtown merchants, your city council, your county council, your economic development people, the high-schooler that doesn’t like history, bring all of these people together and then we help through funding,” she said.

The commission hopes the benefits to education and tourism will last longer than the anniversary events.

“We’re wanting to create foundations that are used over and over and over again. Yes. July Fourth. Got it. But using the tools of the revolution and the stories in weaving that to be part of someone’s strategic plan for economic development,” Fortune said.

She started working to assemble a local 250th commission in September.

“There’s a lot that can be done. The timeline can be fluid,” Boyd said.

Georgetown County was at the center of fighting in the southern campaign that ultimately led to the British defeat at Yorktown in 1781 and the Treaty of Paris that ended the war two years later.

“It had a lot of heroes, not the least of which is Francis Marion, who is the hands-down most well-known South Carolinian in the revolution,” Baxley said.

Marion’s family moved to Georgetown from Berkeley County when he was a child. His sisters lived there, and he tried several times to capture the city from the British.

The Swamp Fox became one of the heroes of the revolution due to a fanciful biography published in 1806 by Mason Locke Weems, the same person whose biography of George Washington created the legend of the cherry tree.

Despite the embellishment, “Marion is as real as real can be, and his stories were as real,” said Baxley, who is an amateur military historian who specializes in the southern campaign. “The interest in Francis Marion is deep, and it’s not limited to this area, because most people don’t know where he’s from.”

The commission plans to publish Marion’s letters as part of the 250th commemoration.

While Baxley expects that there will be renewed interest in Marion, the commission also wants to find other stories that have been overlooked, including those who remained loyal to Great Britain, enslaved Africans and Native Americans.

“We’re going to try to tell these stories based on geography and based on all points of view. That’s never been done before by any historian that I know of,” Baxley said.

Some of those stories won’t be pleasant, Fortune said. “But they’re going to be in context,” she said.

The commission talks about a commemoration rather than a celebration. “I think that’s an important word to use,” Fortune said. “For some folks, the indigenous and the enslaved, it’s not a celebration.”

The goal is to better understand “the fabric of what South Carolina is and what it meant to the founding of the republic,” she said.

That and the expansion of cultural tourism are what the commission sees as its legacy.

Georgetown is well-placed for that because it’s a walkable community with a large number of historic properties, Baxley said.

It also has unsung stories that don’t have to wait for the anniversary of the battles to arrive.

“If you want hotheads, you can find some in Boston, but guess where else you can find them?” Baxley said. “They had Samuel Adams. We had Christopher Gadsden.”

A decade before the war began, Gadsden was arguing that the colonies needed to separate from Britain.

Gadsden was a wealthy merchant in Charleston, but he also owned Beneventum Plantation on the Pee Dee River outside of Georgetown. He is best remembered for his flag with a coiled rattlesnake with 13 rattles that bore the slogan “Don’t tread on me.”

“Nobody loves fireworks better than me. I’m amazed I’ve got all my fingers left, but this is not about fireworks,” Baxley said. “This is about building 50 years of infrastructure for people to come here to see how the world was changed in the South.”