The tale of three plans 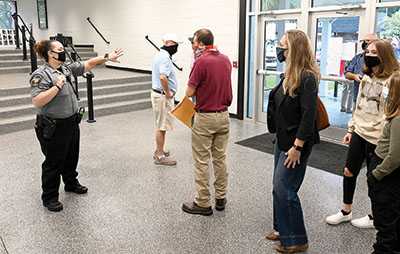 A deputy tells people who showed up at Howard Auditorium for the Planning Commission hearing that the room was at capacity under COVID-19 rules. They were later allowed in.

Gary Weinreich listened to two-and-half hours of public comment and debate on a pair of rezoning requests before he got up to talk to the Georgetown County Planning Commission about his concerns over a proposed development in Murrells Inlet. “It breaks my heart to hear these people from the community come here and beg, literally beg,” he said. Opponents to all three projects told the commission that the Waccamaw Neck can’t handle new, multi-family residential development that will burden roads, drainage and natural resources. What they got were three different outcomes.

A plan for 10 duplex units at the corner of Waverly and Kings River roads will return to Georgetown County Council next week for the second of three required readings. It will arrive with a 3-2 recommendation for approval from the Planning Commission.

The project, Waverly & Kings, needs a zoning change to allow a “flexible design district” on the 3.3 acres for multi-family dwellings. The site is currently zoned for single-family houses.

The plan will have a smaller footprint.

The commission deadlocked 3-3 in August on a plan for 14 units in three-story townhouses. Bruce Watts, who designed the project for prospective buyers, reduced that to story-and-a-half duplexes. Under the current zoning, up to six single-family lots are allowed.

Watts told the commission that the trade-off for the four additional units is the ability to save 87 trees by clustering development on nine-tenths of an acre.

The balance of the property would be restricted from future development by a conservation easement. “We would want to see that before we gave any approval for land disturbance,” Holly Richardson, the county’s interim planning director, said.

Opponents say they like the plan, but think it should be built somewhere that is already zoned for multi-family development and doesn’t require increasing the density.

The citizens group Keep It Green has also challenged the process, arguing that the county ordinance requires the applicant to show a “public necessity” to get a zoning change and that any request requires a complete stormwater plan.

Wesley Bryant, the deputy county administrator and county attorney, disputed that. He asked an outside attorney to review the ordinance.

That review by Thomas Morgan, attorney for Kershaw and Fairfield counties, confirmed that “public necessity” is one of four “factors to be considered.”

Bryant said the final stormwater plan for a development isn’t subject to commission approval. That is handled by staff based on the engineering.

“Stormwater plans are not deemed applicable at this stage,” Richardson told the commission. 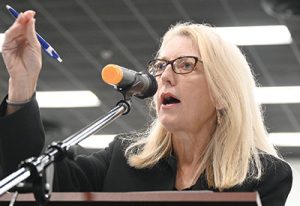 Cindy Person says the county is not following its own ordinances on zoning changes.

“The ordinance was created and enacted to protect the public, not the developer,” Cindy Person, a leader of Keep It Green, told the commission. The county’s procedure favors those “who are in and out of town to make a profit and don’t give two hoots about our community.”

Marla Hamby, another Keep It Green member, used to be a home builder. She said it is likely only four lots could be created from the 3.3 acres because of its shape. She called the notion that single-family development would clear all the trees “scare tactics.”

“Trees. I love them. I’m a big supporter,” said Mary Beth Klein, another Keep It Green leader. “They are not a public necessity.”

“We are pleading with you to follow the law and stop this now,” Klein said.

Commission member Sandra Bundy asked what would be required for a single-family development.

Each house would have to be on a half-acre lot, Richardson said. The flex district “does allow for the clustering,” she said.

The vote to approve the plan was 3-2, with Bundy and Robert Davis opposed. Freddie Hill, Zannie Graham and Elizabeth Krauss were in favor.

Commission member Johnny Weaver, who voted for the first version of the project in August, was absent due to illness. He said afterward that he would have recused himself.

Weaver said he checked with the state Ethics Commission following the August meeting. “I don’t want to do anything unethical,” he said.

Even without development of a 14.5 acre tract on Petigru Drive, the nearby intersection with Waverly Road faces problems. That was the conclusion of traffic engineers in 2008 and again this year after the property was proposed for a change from office and warehouse space to 182 apartments and a single commercial building.

Neither traffic study showed that its respective project would increase those problems.

Members of the Georgetown County Planning Commission aren’t so sure. They want to see more information about the traffic impact of the apartment complex along with stormwater data. They deferred a vote on a zoning change for the project for a month so they can review it.

Georgetown County owns the property through its nonprofit Economic Development Alliance. It planned to create a technology park with Mercom, which owns adjacent property. The tech firm ran into financial trouble and now the county is faced with repaying a $950,000 loan from Santee Cooper that funded the purchase.

Graycliff Capital Partners, which developed the apartments at Litchfield Oaks and Waterleaf, wants to buy the property for $1.38 million. 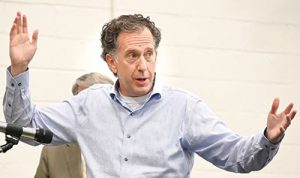 Paul Aiesi, a principal in Graycliff Capital Partners, says the apartments will fill a need.

The apartments Graycliff plans will have about the same footprint as the 167,700 square feet of commercial space, Dan Stacy, the attorney for the firm, told the commission, but would generate less traffic.

The choice wasn’t between vacant land and development, but between the two development plans, he said.

“We all know it’s going to be something,” Stacy said. “This is actually a down-zone from the current plan. You can snicker, but the math is the math.”

Opponents said they did the math. The proposed project takes the site from 0 to 182 dwellings. “That’s an unconscionable increase in density,” Cindy Person, a leader of Keep It Green, said.

Graycliff will rent nine of the units below market rates as “workforce housing.”

Building another 173 units to get nine that are more affordable for workers is not a good trade-off, Mary Beth Klein, another Keep It Green leader, said.

The group has challenged the county’s rezoning process, saying the ordinance requires a “public necessity” for a change. The county says that interpretation of the ordinance is incorrect.

“I can demonstrate a public necessity,” Stacy said. In a growth forum two years ago “one of the desired outcomes for this part of the Waccamaw Neck was more diverse housing, affordable housing.”

“We’re going to meet a need,” said Paul Aeisi, a principal with Graycliff.

Neighbors questioned the impact on stormwater. Marty Green, whose house is separated from the site by wetlands, said “I have to wear rubber boots if I go back behind my house.”

John Evans, who lives about a mile from the site, said the area is one watershed and needs to be considered as a whole.

Marty Farrell, a Keep It Green member, said the same is true about traffic. He called the recent study “a can of worms.”

The 2008 study looked at the impact as far as Highway 17. The current study just looks at adjacent streets.

“The traffic study does seem a bit flawed,” commission member Sandra Bundy said. She questioned the study’s conclusion that most traffic would access Highway 17 from Commerce Drive rather than Waverly Road or Martin Luther King Road.

The commission agreed to defer a vote until November.

The property on Highway 707 is already zoned for multi-family development. All the prospective buyer, Bentley Thompson, needed to show the Georgetown County Planning Commission was that his  plan for 115 units, a combination of townhouses and duplexes, complied with county regulations.

“It may check all the boxes, but I believe that there are some issues here that need special consideration,” commission member Sandra Bundy said.

Bundy convinced the commission to recommend denial of the plan. It now goes to County Council for a vote.

Neighbors told the commission they were concerned about the impact of the project on stormwater, traffic and their quality of life. They asked that the property be limited to single-family development.

“This not a rezoning,” said Dan Stacy, attorney for Thompson. “This is the code we have today.”

The county requires the commission and County Council to review all site plans for multi-family projects with 10 or more units. The practice was started so residents would be aware of new projects.

Gaspar DelMonte told the commission he bought a home at the end of a quiet street in the Silver Oaks development. The proposed project shows duplexes 20 feet away from his property with no buffer required.

Phillip Russell, whose father has owned adjacent property for nearly 45 years, said the project isn’t compatible with the area. “Our culture is at stake. Our livelihood and our charm is at stake,” he told the commission. “The people who make up this community are being driven away.”

Sue Ella Bourne said the project needs close attention because it is close to the Murrells Inlet estuary, which is threatened by stormwater runoff. “We’ve got a lot of problems here,” she said.

Bundy also said the proximity of the estuary made it important to preserve trees on the site. “How can we make some resolution here to save some more open space,” she asked.

The zoning ordinance doesn’t provide any way to require buildings be moved to save trees, said Holly Richardson, the interim planning director.

“The neighbors say it’s not compatible, and I agree with them,” Bundy said.

Elizabeth Krauss, who chairs the commission, said it doesn’t have much flexibility on site plan approval. When no one made a motion on the plan, she moved for approval.

“Then we have failed Murrells Inlet,” Bundy said.

She was joined by Zannie Graham and Robert Davis in opposing the plan. Freddie Hill voted in favor, saying the county has no choice under the law.